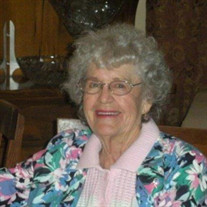 Wynona (Woods) Hinsley “Nony”, age 89, passed away peacefully in Salem, Oregon, on Sunday, December 26, 2021. Nony was born on July 10, 1932 in Glendive, Montana to George and Lenora Woods.  The family lived for seven years on their farm near the small town of Wibaux, MT. The Woods moved from Montana to McMinnville, Oregon in 1939 to settle near her mother’s brother, Roy. Nony attended school in McMinnville and graduated from McMinnville High School in 1950. She enjoyed spending time with her sisters, her friends, and helping her Uncle Roy who lived next door in his orchard. Following graduation, Nony accepted a job with the First National Bank of McMinnville, which began a career in banking until her retirement in 1994.  She married Norman Olson of McMinnville in 1953. The couple and their kids moved to Salem in 1957, and they divorced shortly after. Eventually, Nony married her true love, John Hinsley, and they began a very active life together. She enjoyed bowling, swimming, and snow and water skiing. The kids and grandkids loved their home on the Willamette River in Keizer. After retirement, Nony and John travelled to Melaque, Mexico every winter in their motor home to fish and enjoy the sun. Nony was a strong, friendly and loving woman who was always quick to laugh, even at herself. She loved life and was deeply loved by her family and friends. She will be missed by many, but she lived a busy and full life. Nony was preceded in death twelve years ago by her husband John, and is survived by her son, Robert (Linda) Olson, her daughters Carolyn (Ron) Lane, Ronda Nelson, and two step-daughters, Rita Gunther and Renee Hinsley. She also loved her 7 grandchildren and 4 great grandchildren.  A family celebration is being planned for this summer. Memories and condolences may be left at KeizerChapel.com. Internment will be at Willamette Cemetery, Portland, Oregon.

The family of Wynona Jean Hinsley created this Life Tributes page to make it easy to share your memories.

Send flowers to the Hinsley family.