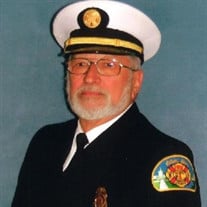 Wayne Weaver left this world on May 21st, 2021 the same way he lived his life - being stubborn as an ox and fighting like hell. The cantankerous old man went by many monikers in his time - some earned (grumpy, grump-pa), some self-professed (old fart, stink bug) - but the three he was most affectionately known by were Dad, Grandpa, and Great-Grandpa. Born August 16th, 1936 in Corvallis, OR to Laura A (née Evers) and John S Weaver, Wayne was the fifth of six children. He was renowned for his incomparable work ethic, which he largely developed while working on a dairy farm in his youth. The Weaver family moved to Colton, OR in 1946 and, in 1954, Wayne graduated from Colton High School. After graduating he worked for three years as a logger before deciding to enlist in the military. Unable to swim and suffering from severe sea sickness, Wayne naturally gravitated towards the Navy, serving on the USS Rehoboth from February 1957 to January 1961. Shortly after returning from the Navy, Wayne married the love of his life and sweetheart, the former Carol Ann Powell, on April 15th, 1961 in Salem, Oregon. Wayne and Carol settled down in Salem and a few short years later gave birth to a daughter, Yvonne, who was followed by her sister Christine, with his youngest John bringing up hell from the rear. An avid outdoorsman, Wayne loved to take his family camping in the family camper, with the dream of one day hosting his own campground. Known for his aforementioned work ethic and having developed a strong mechanical aptitude while serving in the military, Wayne primarily worked as a welder for Neilsen Manufacturing Inc until his retirement in 1999. Welding was not all that Wayne specialized in, however. There was very little Wayne couldn’t fix and you can be sure he’s working his tail off right now plugging every leak and fixing every creaky door to be found in heaven. Wayne’s ability to fix things was largely driven by how much he cared and enjoyed selflessly giving back to his family, friends, community, and country. In addition to serving in the Navy, Wayne was a volunteer firefighter for Marion County Fire District #1, primarily working out of Pratum Station #3. He served for 50 years, including 30 years of active service prior to retiring as Captain of Pratum Station #3 and continuing as a member of support services until his death. He ultimately was inducted into the Oregon Firefighter's Hall of Fame in 2006. But Wayne’s love for giving back didn’t stop with his military service or working for the fire department. Whether it was driving the train at his buddy’s Christmas tree farm, mowing his neighbor’s grass, or helping his grandchildren with myriads of projects it didn’t matter - Wayne enthusiastically helped any and everyone he could, never expecting anything in return. Speaking of grandchildren, Wayne has a truckload of them whom he loved very, very dearly and was immensely proud of. From Yvonne came Jake, Josh, Kelly, and Madison; from Chrissy came Alyssa; and from John came Tanner, Colbi, and Cassidi. He also has two adorable great-grandchildren, Colton and Scotland, from Josh and granddaughter-in-law Samantha. Grumpy but lovable, stern but caring, Wayne was the best grandfather any of his grandchildren could ever ask for and an even better role model, mentor, and teacher. His biggest dream was to have a close-knit, loving family and by jove Wayne achieved that and then some. Wayne will be dearly missed by his friends, family, and acquaintances. Whether it was his idiosyncratic diet (including staples such as raw onions and bread dipped in green bean juice), his infectious work ethic and leadership, his love for life, or his jovial laugh and sense of humor, this much is true: few men embodied the American spirit better than Wayne did. A loving husband, father, grandfather, great-grandfather and all in all great man, Wayne left this world a much better and brighter place than it was when he arrived. Wayne was preceded in death by his brother Roy Weaver and sisters Wilma Swinney & Verna Nichols. He is survived by Brother Clarence Weaver, Sister Leona Schaefbeaur, Wife Carol Weaver, Children Yvonne Burdick, Christine (Mark) Isaac, and John Weaver (Abi Cornwaith), Grandchildren Jake Burdick, Josh (Samantha) Burdick, Kelly (Nick) Parsell, Madison Farnes, Alyssa Isaac, Tanner Weaver, Colbi Weaver, and Cassidi Weaver, and Great Grandchildren Colton Burdick and Scotland Burdick. Wayne's Celebration of Life will be held at Pratum Fire Station #3 on June 26, 2021, at 2:00 pm. In lieu of flowers the family is requesting that donations be made to Marion County Fire Department in Wayne's name. Assisting the family is Keizer Funeral Chapel.

Wayne Weaver left this world on May 21st, 2021 the same way he lived his life - being stubborn as an ox and fighting like hell. The cantankerous old man went by many monikers in his time - some earned (grumpy, grump-pa), some self-professed... View Obituary & Service Information

The family of Wayne DeWitt Weaver created this Life Tributes page to make it easy to share your memories.

Send flowers to the Weaver family.