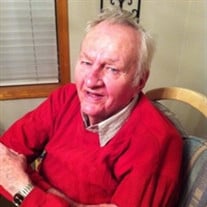 We are sad to announce the sudden passing of Vern Schrage. Vern died peacefully in his sleep on the morning of May 23rd at the age of 86. Vern's loving nature, humor, and youthful spirit will be missed by all who were fortunate enough to have known him, especially his wife, daughters, and grandsons. Vern was born in 1927, in Raeville, Nebraska, a small farming community. His mother passed away when Vern was only 25 days old, so his dad and Aunt Kathryn raised him along with Vern's brother and sister. When not helping with the family farm, young Vern loved to play cards, baseball, and "Sheeny"- an outdoor sport that he and his friends invented. Growing up during the depression wasn't always easy, but Vern had a wealth of fond childhood memories that he loved to share with family and friends. Vern's fun stories are one of the things that people loved most about him. Vern went into the U.S. Army just after the end of World War II, where he served as an MP. While stationed at Fort Knox, Vern loved to go to dances where they played Glenn Miller Orchestra, which remained his favorite music throughout his life. After receiving an honorable discharge from the U.S. Army and spending a few years back home in Nebraska, Vern moved to Oregon in his early 30s, where he met his future wife, Sally. Vern got an "instant family" when he married Sally in 1962, for she had two toddler daughters from a brief first marriage. Vern celebrated his 50th wedding anniversary with Sally in September 2012, surrounded by family and love. Being that Vern was an uncle to mostly just boys at that time, he was especially excited to suddenly have two little girls, who he raised lovingly as his very own. His hope for daughters must have been very strong- for he soon became the father of three other girls. Vern always joked about being the only man in a family of seven, living in a house with only one and a half bathrooms. While many of his daughters gave him some grief during their teenage years, Vern was always there with love, support, and more than a few midnight car tows and cans of gas. But God must have thought he had enough girls in his life, for he was later graced with only grandsons. His immense dedication to his family could never be matched. Vern's dedication to his employer was also unparalleled. During his 36 years at View-Master/Tyco, you could count the number of his unscheduled days off on a single hand. Living in Beaverton during this time, Vern was hired as Assistant Foreman in 1960, and worked similar positions throughout his career until his retirement in 1996. Driving his forklift was Vern's favorite part of his job, and he was very proud of a plaque his coworkers created for his retirement that included a tiny toy forklift affixed to it. Vern enjoyed physical activity throughout his life, and he particularly loved long walks. Until moving to Salem in 2006, Vern's Beaverton neighbors and friends got accustomed to driving past him while he was out on his long walks. Even at 86, Vern continued to go to the gym twice per week to "travel" miles on the treadmill and exercise bike, and to visit with other gym members. Vern also loved to catch up with family and friends on Facebook, play Scrabble on his computer, and played cards at his beloved St. Edward Catholic Church. He never missed watching The Daily Show and Colbert Report. Vern loved watching football, and was a devoted Portland Trailblazers fan. We will be saying "farewell" to Vern at 10:30am on Wednesday, May 29th, at St. Edwards Catholic Church in Keizer, Oregon. Following mass at 2:00pm, Vern will be laid to rest with military honors at Willamette National Cemetery in Portland. Anyone whose life was touched by Vern is welcome to attend the mass and/or burial ceremony. Vern is survived by his wife, Sally; daughters, Kathy, Colleen, Darlene, and Pauli; grandsons, Michael, Daniel, and Brian; and sister, Viola of Petersburg, Nebraska. Vern is now in heaven with his eldest daughter, Jeannie, and his beloved brother, Vet.

We are sad to announce the sudden passing of Vern Schrage. Vern died peacefully in his sleep on the morning of May 23rd at the age of 86. Vern's loving nature, humor, and youthful spirit will be missed by all who were fortunate enough to have... View Obituary & Service Information

The family of Vern Gerald Schrage created this Life Tributes page to make it easy to share your memories.

We are sad to announce the sudden passing of Vern Schrage. Vern...

Send flowers to the Schrage family.