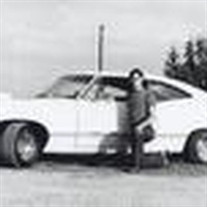 Theodore Dale Mowell age 62, passed away on Saturday October 29,2011 from Huntington's chorea and Tinea Versicolor. His loving wife, Marion, children and friends were by his side. He fought a very long and courageous battle and was a strong and tenacious man who was incredibly loved by his family and friends. He remained at home during the nine-year duration of his illness under the care of his wife, Marion. Theodore (Ted) was born on June 8th, 1949 in Greybull, Wyoming, to parents Donald Dale and Barbara Mowell (deceased) He grew up in Guam, Long Beach, CA and Shell, WY as the family moved to follow his father who served in the Navy .. He served in the Air Force from October 1968 to October 1974 and achieved the rank of Staff Sgt, including a tour of duty in Taipei, Taiwan. He later served in the Oregon National Guard Reserve for five years. Ted's hobbies included building model cars and watching every form of automobile racing at any time of day or night. He also enjoyed running and walking every day. Ted worked as a diesel mechanic at Golden Grain Macaroni Company in Seattle WA. He later went to work as a roofer for Success Roofing Company. After moving to Oregon, he continued to work as a roofer for McGilchrist Roofing for a short time. With the help of in-laws, Ted went to college and received his Associate Degree in Electronics Technology, with a perfect 4.0 gpa He then worked at IImorrow/UPS/Garmin Aviation Services for 20 years. Ted first married in 1972 and settled in Mesa, AZ. He had a son, Carl Mowell, from that first marriage. Later he met Marion Mesdag and they were married in April, 1978. They had two sons, Adam Mowell and Kevin Mowell. Ted was a very hard working, honest, faithful, devoted, husband and father. His children and grandchildren were the highlight of his life. Ted is survived, by his loving wife of33 years, Marion; his sons, Carl, Adam and Kevin; his daughters-in-law, Kaelyne, Olivia, April; his grandchildren, Hailey, Brogan, Jasmine, Abigail, and Kennedy Luann who will join the family in December; his brother, Tony from Shell Wyoming and several aunts uncles and cousins. Family Viewing will be Friday, November 11th from 2 pm to 5 pm at Keizer Funeral Chapel. Services will be November 12th, 2011 at Keizer Funeral Chapel, 4365 River Road N Keizer, Oregon. Viewing will be from 9 am to 11am with services beginning at 11 am. Following will be a Celebration oflife at Keizer Elks Lodge, 4250 Cherry Ave Northeast, Keizer, Oregon. Online condolences may be made to www.keizerchapel.com. Keizer Funeral Chapel is in care of arrangements.

Theodore Dale Mowell age 62, passed away on Saturday October 29,2011 from Huntington's chorea and Tinea Versicolor. His loving wife, Marion, children and friends were by his side. He fought a very long and courageous battle and was a strong... View Obituary & Service Information

The family of Theodore Dale Mowell created this Life Tributes page to make it easy to share your memories.

Send flowers to the Mowell family.