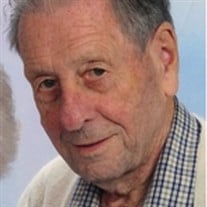 Sam Orcutt March 10, 1922 ~ October 16, 2010 Sam Orcutt of Keizer, Oregon passed away October 16, 2010 at his home in Keizer at the age of 88. Sam was born March 10, 1922 in Salem, Oregon to Elmer and Frances Orcutt. He graduated from Salem High School in 1939. Attended Willamette University until his enlistment in the Army Air Corps after Pearl Harbor where he flew a B-24 in the China-Burma-India Theatre, Sam was honorable discharged in Dec. 1946. In 1947 Sam and his father built and opened Orcutt's Market in Keizer. Married his high school sweetheart Sally McClelland on November 30, 1947 in Salem, Oregon, together they ran Orcutt's Market in Keizer until his retirement. Sam was a founding member of the Keizer Fire Department and actively served for 45 years. He also served on numerous community organizations and boards. Sam loved to fly his plane, enjoyed fishing and spending time with his family and friends. Survivors include his wife Sally Orcutt of Keizer, Oregon. Children; Sam Jr. (Carol) Orcutt of Chicago, Illinois , Jean (Craig) Prough of Sheridan, Oregon, Julie (Bruce) Wilson of Keizer, Oregon, Paul (Jody) Orcutt of Keizer, Oregon, Andy (Pam) Orcutt of Keizer, Oregon, 14 grandchildren, 5 great grandchildren. Proceeded in death by his son Dale Orcutt in 1969. Private family services will be held at Belcrest Memorial Park in Salem, Oregon Contributions can be made to Juvenile Diabetes, Marion-Polk Food Share or a Charity of Choice in care of Keizer Funeral Chapel 4365 River Road North, Keizer, Oregon 97303. "He was particularly proud of his street in Keizer. So when you drive by Sam Orcutt Way take a moment and say Hi Sam, good job!"

The family of Sam Orcutt created this Life Tributes page to make it easy to share your memories.

Send flowers to the Orcutt family.