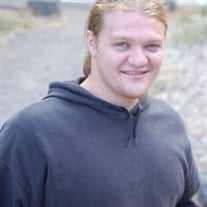 Ryan B Muhlestein, (27), born to Russell G. and Debbie A. Muhlestein in Orem, UT on Sept 4, 1985, unexpectedly left us on Dec 16, 2012. We are deeply saddened by losing him too soon, however, we take great comfort in knowing he is in the care of our Savior Jesus Christ and is now with his older brother Rusten progressing and experiencing new adventures together! Ryan was preceded in death by his older brother Rusten in 2009. He is survived by his parents; two brothers, Jeffrey and Jason, and sister Alissa; grand parents; June Robison of Keizer; Gerald and Marolyn Muhlestein of Springville, UT; and Vern and Pam Robison of Panguitch, UT, and by many other relatives. Ryan attended Gubser Elementary, Whiteaker Middle School and McNary High. In his younger years he participated in boy scouting and earned the rank of Life Scout. He attended Chemeketa Community College and was awarded a Certificate of Academic Excellence when he got a 4.0 GPA that earned him a place on the President's list. Ryan enjoyed cooking, reading, gardening, woodworking, hiking, camping, computer games, movies, and discovering and gaining knowledge and understanding. Whether he was spending time at the beach with his family or hiking fifty miles along the Pacific Crest trail with the Boy Scouts, or just hanging out around the neighborhood with his buddies, these were some of the happiest times for Ryan. He valued true and loyal friendship more than almost anything and he loved the time he spent with his friends and family. He was a very resourceful survivor at heart and always tried to fit in just a little more fun in whatever activity he was involved with. Ryan was determined to conquer the obstacles he faced in his life and he never gave up! He continued to get up over and over again and kept trying his best! Those of us who knew Ryan, were inspired by his determination, kind heart, and friendly personality. Ryan would want us all to more fully enjoy each day with the time we have in life. We love and miss you so much Ryan! Funeral service was held on Dec. 22, 2012 at 11 a.m., at The Church of Jesus Christ of Latter-Day Saints, 1375 Lockhaven Drive NE in Keizer, OR Arrangements: Keizer Funeral Chapel. See online Keizerchapel.com for Ryan Muhlestein. Interment was at Claggett Cemetery in Keizer.

Ryan B Muhlestein, (27), born to Russell G. and Debbie A. Muhlestein in Orem, UT on Sept 4, 1985, unexpectedly left us on Dec 16, 2012. We are deeply saddened by losing him too soon, however, we take great comfort in knowing he is in the care... View Obituary & Service Information

The family of Ryan Benjamin Muhlestein created this Life Tributes page to make it easy to share your memories.

Send flowers to the Muhlestein family.