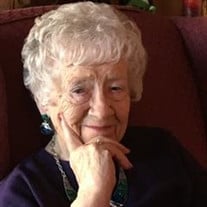 Ruth Evangeline Lundstrom 2/18/27-8/7/21 Ruth was born in Grove City, Minnesota on February 18, 1927. She was the eldest of three daughters born to Rudolph and Anna Hansen and grew up on a farm in rural MN. After high school she left for Minneapolis to study nursing and work as a nanny. On Friday night, August 1, 1947, in 105º at a country church, she married Emert Lundstrom, with whom she grew up with since grade school. Together they built a lifetime of love and happiness until Emert’s passing in 2016. They had one daughter, Sherry Collins. In 1951, they ventured out west stopping in Seattle to visit relatives. They loved the NW and decided to make it their home. However, in 1961 they moved to CA for a short time while Emert went to school to receive his BA in Education and Biblical Literature at Azusa Pacific University. Ruth worked at the University where she found her niche working in administration and loved being around the students. Several years later they moved to Oregon where Ruth worked and supported her husband at Western Evangelical Seminary in Portland while he received his ordination in the Evangelical Methodist Church in 1982. Ruth again worked in the administration office and loved working with the students. In 1985 their daughter suggested they move to Salem. Ruth loved the idea. Being close to her grandchildren was a dream come true. Emert had retired, but continued teaching as a substitute teacher in Salem and Ruth secured and loved her job working for the Dean of Law at Willamette University. She remained there until her retirement in 1995. Ruth’s greatest love was her family and church life at Salem Evangelical Church where she enjoyed serving the Lord in her senior years; as a greeter, welcoming people to church. She was an amazing prayer warrior for anyone with a need. She loved helping her daughter and son in law at McNary High School. She spent many hours helping with costumes for the school plays. She was again in her element working with students. Ruth was grandma to all of them. Her favorite pastimes included her flower garden, hummingbirds, and trips to the ocean. Like Ruth, beauty surrounded her. Her greatest joy, however, was becoming a Great Grandma and getting the new title of G.G. She thrived on phone calls, cards, and visits. Her family was truly her life. Ruth is survived by her daughter Sherry Collins, (Ken Collins, deceased), grandchildren, Kristi Collins-Grogg (Bill) and Bill Wood (Pam), two great grandchildren, Sean Wood and Kendra Collins. Surviving sisters, June Hammer (Harvey) and Dorothy Lindstrom (David, deceased) and numerous nieces and nephews. On August 7, 2021, her Lord and Savior took her to her heavenly home. The family suggests in lieu of flowers, donations may be made to One Mission Society, in care of Salem Evangelical Church, Salem OR or Pentacle Theatre, Salem, OR where she enjoyed attending plays. Due to possible COVID restrictions, a memorial service will be held at a later date.

Ruth Evangeline Lundstrom 2/18/27-8/7/21 Ruth was born in Grove City, Minnesota on February 18, 1927. She was the eldest of three daughters born to Rudolph and Anna Hansen and grew up on a farm in rural MN. After high school she left for Minneapolis... View Obituary & Service Information

The family of Ruth Lundstrom created this Life Tributes page to make it easy to share your memories.

Send flowers to the Lundstrom family.