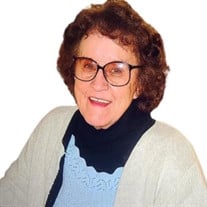 SALEM – On Tuesday, October 12, 2021, Ruth Kube Linfoot, surrounded by her younger brother, daughters, and some of her many grandchildren, passed away at the age of 98 in her daughter, Marylin’s (Al) home near Brooks, OR. They sang together her favorite hymn, “Love Lifted Me” moments after she passed. Ruth was born at home October 23, 1922, in LaGrande, OR, to Alfred Leopold and La Vern Showalter Kube. She Married Delmer B. Linfoot in Walla Walla, WA in 1938 (during the Great Depression). She was 15 and Delmer was 18. They were happily married for 70 years. After WWII (Delmer served in the Navy) they moved to Pendleton, OR where they raised their 3 daughters, Delma Ruth Bracken, Marylin L. Shannon, Carlene L. Hanson, and Jerry Ray Linfoot Adams (Who was given to her when he was 6 years old). Ruth was preceded in death by her husband Delmer (in 2007), Jerry R. Linfoot Adams (in 2019), her father (in 1936), her mother (in 1963), her sisters Eva Sinclair, Estella Sinclair, Mary Stoll, and her brother Vern Kube and many nieces and nephews. She is survived by her brother Jim Goben (Linda), Hermiston OR, daughters Delma Ruth, Marylin (Al) and Carlene, 15 grandchildren, 38 great grandchildren, and 3 great-great grandchildren. She was a long-time member of the First Assembly of God Church in Pendleton, OR and then Family Worship Center in Albany, OR. She was a Sunday School teacher until she was 87 years of age. She had the ministry of helping those who were struggling and in need. She genuinely loved people and always “expected the best” of her loved ones. Her memorial service will be held at Keizer Funeral Chapel (4365 River Road N) on Thursday, October 21st, 2021, at 1:00 p.m. On Saturday, October 23 (Ruth’s 99th birthday) there will be a celebration of her life at the 1st Assembly of God Church in Pendleton, OR (1911 SE Court Ave.)at 10:00 am. Then we will take her to Island City Pioneer Cemetery to be buried between Delmer and her father.

SALEM &#8211; On Tuesday, October 12, 2021, Ruth Kube Linfoot, surrounded by her younger brother, daughters, and some of her many grandchildren, passed away at the age of 98 in her daughter, Marylin&#8217;s (Al) home near Brooks, OR. They sang... View Obituary & Service Information

The family of Ruth Kube Linfoot created this Life Tributes page to make it easy to share your memories.

Send flowers to the Linfoot family.