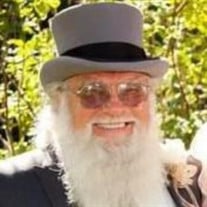 Russell Eldon Hampton, January 14, 1934 – March 29, 2022 Russell Eldon Hampton died peacefully in the early hours of March 29, 2022, at the age of 88 with his wife Patricia by his side in their home in Keizer. The many family members and friends who visited him in the week before he died was a testament to the person he had become. Born on January 14, 1934, in Kadoka, South Dakota, to Hazel and Orville Hampton, he was the youngest of eight children, and by his admission the most troubled. During his early childhood the family lived in a prairieland sod house near Badlands National Park. When Russ was 7, the family moved to Oregon, where he attended Dayton High School, played a little bit of sports, and stayed in an equal amount of trouble. Russ proudly served in the U.S. Army during the Korean conflict. He maintained a love of country and flew “Old Glory” his entire life. Russ had a very strong work ethic. He held a variety of jobs through the years, including bartender and factory line supervisor, but he found his calling in carpet and flooring installation, where he became a perfectionist in his craft. After many years as an installer, his knees thanked him when he transitioned into a sales position, where his outgoing personality was a perfect fit. He often went above and beyond to make sure customers chose the materials that were just right for them, even when it meant return trips to a home to measure and/or evaluate a job one more time. Russ retired from the flooring business at age 77, and while his work was always very important to him, his greatest personal growth came from bouts with cancer, heart disease and alcoholism. He was blunt but empathetic. He could become angry but was always caring and held great compassion for all living souls, human, feline, and canine. Russ was an active member of Alcoholics Anonymous for 41 years, which was a blessing for his family, friends, and himself. During his youth and throughout the first half of his life Russ had a difficult time because of alcohol and his determination to do things “His Way.” As his drinking escalated, he experienced much sadness, anger, and frustration, as did all those around him. In 1980, he met the best catch of his life, Patricia. They were married for 31 years and together for 42. Through good times and sad, their marriage remained strong. They stood together and loved each other until the end, even when they had disagreements to work through. When Pat dealt with an extended health issue, Russ became a wonderful caregiver. He slept many nights in a hospital chair by her side, and then took over most of the household duties when Pat was recovering at home. With Pat by his side, and with the help of the many incredible friends he and Pat made through the SOS Recovery House of Salem, Russ was sober the final 41 years of his life. Russ had a positive attitude, usually. He will be remembered for his bright smile, quick wit, hard work, generosity, honesty and for how he protected those he loved. He was always ready to help, regardless of the situation. With his long gray hair and beard, he played a great Santa Claus, delighting the children of SOS Club members during many Christmases. By the end, Russ was completely opposite of who he was in his younger days. He had a sense of humor and could take a joke. The world has truly lost a compassionate soul who will be remembered fondly by all who knew and loved him. Russ is survived by his wife of 31 years, Patricia Hampton, and numerous family members. He was preceded in death by his parents, Hazel and Orville Hampton, brothers Don, Harry, and Les, sisters Lois and Violet, and son Randall Jay Hampton. Other survivors include his sisters Rose Lewis of Bryan, Ohio, and Mary Tucker of Tillamook, Oregon, son Rusty Hampton (Cindy) of Canton, Mississippi, stepdaughter Christine Davis (Andy) of Salem, stepson Michael Kuntz, grandchildren Roxanne Hampton (Nick Smith) of Portland, Russell Hampton III of The Philippines, Emilee Peterson (Vail) of Keizer, Andrew Kuntz, and Natalie Kuntz, great-granddaughter Amberlee Peterson of Keizer, and many nieces and nephews. A memorial and celebration of life will be held at a time and site to be determined. In lieu of flowers, Russ and Pat would be thrilled if you made a contribution to the SOS Recovery House, 1797 Center Street NE, Salem, Oregon, 97303.

The family of Russell Hampton created this Life Tributes page to make it easy to share your memories.

Send flowers to the Hampton family.