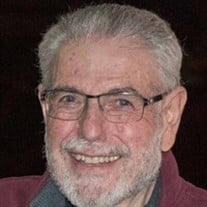 On April 17, 2020, Ron Wilson died of complications due to stroke and heart attack at Salem Hospital. His family could not be with him because of Covid 19 virus concerns. Ron was born in San Francisco, California but moved in his middle school years to San Jose, California. He married his college sweetheart, Violet Avila, in 1971. After graduating with a BA in Behavioral Sciences, he went on to complete a master’s program in Psychology. While looking for a position in his field, he worked with his father in the handyman business for a short time. In December 1974, he moved to Salem, Oregon to work at Fairview Training Center. He rose from unit psychologist, with an office literally in a narrow hallway, to Assistant Superintendent. In 19­­­88, he obtained a position with the Oregon Schools Boards Association as a Labor Relations and Policy Specialist and ended his tenure there as an Associate Executive Director in 2007. In addition to everything else, Ron taught community college classes in psychology and school administration. He was the first non-lawyer to obtain a Certificate in Dispute Resolution from Willamette University. And, he was president, and later Executive Director, of the National School Boards Association ending in 2013 to become fully retired. But he was not really retired, because Violet had him working in the family business of property management. He did repairs, rebuilt cabinets and drawers, refinished, showed units, and generally helped as needed. An avid card player, he belonged to many bridge and pinochle clubs but was up for any card game someone was willing to play. He was a great reader, especially of Science Fiction. And, maintained a high exercise regimen including bicycling thousands of miles per year. In high school woodshop and as a handyman with his father, Ron loved the feeling of wood under his hands and looking for highly figured, exotic wood for his projects. He built furniture from scratch, including hand shaped rocking chairs in his business, Wilson’s Wood’n Things. In his later years, he worked in marquetry using thin veneers to create artistic landscapes, although flowers were his preferred subject. He enjoyed spending time with his reading buddy and beloved daughter, Becca and her husband, Chad. One of his favorite “jobs” was being “Papa” to his granddaughters, Emma and Sophie. He was never more delighted than when he could take them for walks, build gnome houses or color with Emma, or read them stories. He is survived by his wife of 48 years, Violet, his daughter, Rebecca (Chad) Adler, and his aunt Irene Mekisich. He was predeceased by his brother, Larry, and his parents Edward “Clay” and Anne Wilson and his uncle, John Mekisich. We will miss his warm smile, intelligent conversations, quick wit, and bear hugs. In lieu of flowers, the family asks that you donate to the Marion County Food Share or charity of your choice. A celebration of life will occur later.

On April 17, 2020, Ron Wilson died of complications due to stroke and heart attack at Salem Hospital. His family could not be with him because of Covid 19 virus concerns. Ron was born in San Francisco, California but moved in his middle school... View Obituary & Service Information

The family of Ronald Edward Wilson created this Life Tributes page to make it easy to share your memories.

Send flowers to the Wilson family.