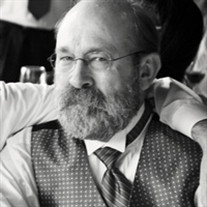 Ron C. Bassett-Smith September 4, 1949 - January 17, 2014 Ron Bassett-Smith, 64, of Keizer died January 17th, a warrior in his battle against Melanoma. He was born in Lafayette, Indiana on September 4th, 1949 to Charles and Marjorie Bassett, the first of five children. Ron served in the Military in Vietnam, serving two tours of duty. In 1972 he moved from Michigan to Oregon. He completed a bachelors degree studying sociology from Oregon State University. He married his wife in 1976 and they enjoyed 38 happy years together. Upon completing school, Ron began serving his community through his efforts working with disabled veterans and working for refugee employment programs. Ron finished his career as Chief Operations Officer at Chemeketa Community College. He also served on many boards including the board of directors for the Salem Outreach Shelter and on the budget committee for the Salem-Keizer School district for many years. Ron was a kind and passionate man whose sense of humor brought joy to those who loved him. He liked to do things big for his family, such as putting on a fireworks show every 4th of July. His hobbies included classic cars, woodworking and home projects. His only regret was that he only had 40 more hours left to complete the '65 Barracuda he was restoring with his son, Trevor. Otherwise his life was filled with fireworks, a loving and loyal dog, Bub, his wife and three children and being Grandpa Truck. He is survived by his wife Nina; children, Sean (Makayla) of Seattle, Chelsea (Daniel) of Keizer, Trevor of Keizer; grandchildren, Cameron, Sara, and Weston; his two dogs and two cats. His sisters, Marsha and Paula and his brother, Brian live in Michigan. His parents and brother Jeff precede him in death. A celebration of life will be held on Thursday, January 30, at 3p.m. at Clear Lake United Methodist Church. In lieu of flowers, contributions can be made to the Ray of Hope (www.rayofhope4all.org) PO Box 746 Beaverton, OR 97075 or the Marion-Polk Food Share (www.marionpolkfoodshare.org), 1660 Salem Industrial Drive NE, Salem, OR 97301. Arrangements entrusted to Keizer Funeral Chapel & Cremation Services. Online Condolences, www.keizerchapel.com

The family of Ron C Bassett-Smith created this Life Tributes page to make it easy to share your memories.

Send flowers to the Bassett-Smith family.