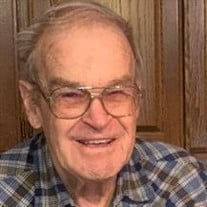 Not sure what to send?

Robert Raymond Ebner, resident of Keizer, died on January 7, 2022. Robert (Bob) was born on June 30, 1933 in Mt. Angel, Oregon, the son of Raymond Ebner & Bernadette (Lux) Ebner. Bob grew up doing farm work, and attended North Howell Grade School, Mt. Angel Grade School, and Mt. Angel Prep. In 1953 Bob joined the Air Force as a Jet Engine Mechanic and was stationed at Portland Air Force Base until his honorable discharge in 1957. During his time in Portland, he met his future wife Patricia (Pat) Geschwill at a dance in Mt. Angel. On January 3, 1959 Bob and Pat were married and they moved to Seattle, Washington where they had three children: Randall, Loren & Diane. Bob worked at Boeing on missile design until 1972 when the family moved to Keizer. Bob worked for the State of Oregon, first at the Mental Health Division as a Systems Analyst, then at the Department of Veteran’s Affairs as a Systems Supervisor, retiring in 1996. Bob was a member of St. Edward Catholic Church, The Knights of Columbus and the Keizer Elks Club; he enjoyed dancing, extensive travel, woodworking and gardening. Bob is lovingly remembered by his family for his kindness, friendliness to others, generosity, his quick smile and sense of humor. He is survived by his wife, Patricia; son, Loren of Missoula, MT; daughter Diane Schelske, son-in-law Steve Schelske, and grandson Nicholas Schelske of Aumsville; brothers William of Nyssa and Paul of Beaverton. Bob was preceded in death by his son, Randall, his sister Mary Ann Perreira, and brothers Richard, Phillip and Lawrence. Family and friends may pay their respects to Bob at Keizer Funeral Chapel on January 24th from 12:00 noon to 4:00 p.m. Memorial contributions may be made to the Father Taaffe Foundation and the St. Edward Catholic Church building fund. A memorial event celebrating Bob’s life is being planned for a later date.

The family of Robert "Bob" Raymond Ebner created this Life Tributes page to make it easy to share your memories.