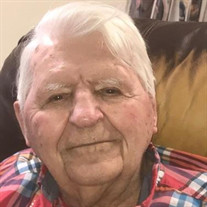 At sunrise Thursday, May 13, 2021, Paul W. Morgan, loving husband, friend, and father, grandfather, and great-grandfather, died at age 95. Paul was born in Tillamook, Oregon on August 30, 1925 to Paul and Pauline Morgan. He was the youngest of four siblings who all preceded him in death, his caring, strong minded sisters Jean, Ruth and Shirley. Paul grew up in rural Pacific Northwest amidst a loving family and heart for adventure that fueled his entire life. He attended but never finished at Enumclaw High School where he played center on the football team and trumpet in the band. Drafted into the military while in high school, Paul served his country in combat during World War II as a US Navy signalman aboard the attack transport ship USS Deuel at battles of Iwo Jima and Okinawa including 15 trips across the Pacific repatriating soldiers from the battlefield to the mainland. He graduated from Washington State University in criminal justice and later from Oregon College of Education with a master’s degree. His career included law enforcement and over 30 years in Oregon State parole and probation followed by a medical records role at Salem Hospital. Community service was a long and strong interest which included active memberships in the Presbyterian Church, Boy Scouts and Keizer Food Bank where he helped lead its growth and reach as Director in his later years. Paul had a passion for mountain climbing and summited ten peaks in the Cascades. He was known for his big hands and heart as well as a kind and compassionate spirit. He shared freely of his love for classical music, the outdoors, the stars, trains, and was always known for enthusiastic hugs with a firm squeeze at the end. Paul is survived by his wife Nancy Walker Morgan, sons Jeffrey and Randy Morgan, Brian and Tim Walker, Ken and Rick Erickson and daughters Margaret Barzler and Karin Beard; many nieces, nephews, grandchildren, and great grandchildren. He is preceded in death by his wife Lillian, wife Janet, and son Jon Erickson. A graveside service will be held Monday, June 7, 2021 at Belcrest Memorial Park in Salem, Oregon at 1 o’clock p.m. Memorials may be directed to John Knox Presbyterian Church, Keizer; Keizer Community Food Bank or Marion Polk Food Share.

At sunrise Thursday, May 13, 2021, Paul W. Morgan, loving husband, friend, and father, grandfather, and great-grandfather, died at age 95. Paul was born in Tillamook, Oregon on August 30, 1925 to Paul and Pauline Morgan. He was the youngest... View Obituary & Service Information

The family of Paul Wesley Morgan created this Life Tributes page to make it easy to share your memories.

Send flowers to the Morgan family.