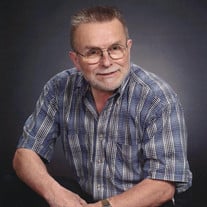 Mike Hood, 81, of Keizer Oregon died suddenly at his Willamette Lutheran Home residence on Thursday, July 29th.  Michael Emmett Hood was born the first son and second child of Emmett and Marie (Haupts) Hood on April 4th, 1940 in Fort Dodge, Iowa. Three younger siblings later joined the family. He spent his early years on a farm near Palmer, Iowa. When Mike was twelve, the family moved into the town of Pocahontas, Iowa.  He attended Sacred Heart Catholic School, graduating in 1958. After graduation Mike moved to Omaha, Nebraska where he attended business school at Commercial Extension School of Commerce. He worked at an Omaha bank before moving to Salem, Oregon in 1966 to work as a computer analyst for Credit Bureaus Incorporated. He moved briefly to Atlanta, Georgia before returning to Salem to work for the State of Oregon, Department of State Police as a Systems Software Analyst. He was a loyal and dedicated employee there for 21 years before retiring in, 1995. Mike was a Life Member of the Benevolent and Protective Order of Elks for 55 years and an active member of the Keizer Elks Lodge since 1974 where he was a tireless volunteer. He served as the Lodge Secretary for 11 years. He was the Keizer Lodge “Elk of the Month” countless times and was the 1985-1986 Keizer Elks Lodge “Elk of the Year.” He received the Grand Exalted Ruler’s 2001-2002 Outstanding Service Commendation. Mike received the North Central District “Elk of the Year” in 2008-2009 and was again the Keizer Elks Lodge “Elk of the Year” in 2008-2009. Mike considered the Keizer Elks Lodge as his second home and the members as his second family. He spent many, many happy days there all the way until his passing. Upon retirement, Mike also volunteered for the Keizer Police Department for 18 years, beginning in November 1995 and was awarded Volunteer of the Year Award in 2005. He was a faithful member at Saint Edward Catholic Church, volunteering in the office and for church events that served the Keizer community. Mike was so smart and excellent with numbers. He loved to solve extremely hard logic puzzles and was always working on a crossword or jigsaw puzzle. He also enjoyed being the keeper of the genealogy records for his family and donated over 10 gallons of blood to the American Red Cross. Mike liked good jokes and since the age of the internet, shared them at least weekly with family and friends via email. He was a quiet man, with strong opinions, a deep faith in God, a heart for service, and love for family. Mike is survived by his sister Carol (Bob) Stover of Fargo North Dakota, sister-in-law Mary Pat Hood of Omaha Nebraska, uncle Don Haupts of Manson Iowa, aunt Jeannine Harder of Fort Collins Colorado; nieces and nephews Kellie (Tim) Lute, Jim (Yvonne) Tanner, Mike Tanner, Debbie (Bernie) Wieger, Jacque (Tom) Zalewski, Tracy (Tony) Trotter, Troy Sauter, Alison (Steve) Dye and Angie Elliott; 14 great and great-great nieces and nephews with another one on the way; and a host of first, second and third cousins. He was preceded in death by his parents and grandparents, sisters Kaye Barnett and Connie Sauter, and brother Pat Hood.  A Celebration of Life will be held on Saturday, September 11, at 1pm at the Keizer Elks Lodge. Arrangements are by Keizer Funeral Chapel. Remembrances: Elks National Foundation or the favorite charity of your choice.

The family of Michael Emmett Hood created this Life Tributes page to make it easy to share your memories.

Mike Hood, 81, of Keizer Oregon died suddenly at his Willamette...

Send flowers to the Hood family.