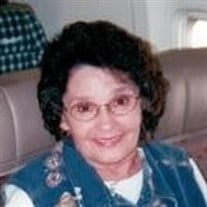 Maureen Beth Williams, 71, of Salem died Friday, April 9 at her home. Maureen was born October 29, 1938 in Great Falls, Montana. Their daughter of Camillus (Mac) and Katherine McLain. At a young age the family moved to Big Fork, Montana where she met and grew up with and eventually married Don Ottosen in 1954. They lived in various towns throughout Montana as Don worked construction building roads and missile site during the Cold War. At that time, Maureen spent her days raising their four children. How she liked to reminise about how much fun they got out of life, on "just getting by." During these years she made a lot of life long friends. Following a short stint as a single mother, she met Blake Williams and they married in 1966. They moved the family to El Toro, Calif. and in 1972 moved to Oregon settling in Salem. Maureen enjoyed shopping and bargain hunting and for a time had a real passion for refinishing antique furniture. Her favorite flowers were roses and she always had a large variety to tend to in her garden. She was a great cook, but was best suited to the roll of Grandmother. Everyone always looked forward to the holidays and receiving a loaf of grandmas "walnut bread." Working in her later years at True Value in Keizer and then the West Salem store, Maureen enjoyed working with the public. It kept her busy and social. She may have actually purchased and tried every product she endorsed. She is survived by 5 children, Peggy and Chuck Jordan of Salem, Ron Ottosen of Salem, Shane and Carla Ottosen of Molalla, Shawn and Teri Ottosen of Mill City, and Blake and Monica Williams of Keizer; 2 brothers, Mike and Monogeng McLain of Aloha and Tom and Diane McLain of Soldotna, Alaska; 14 grandchildren; and 6 great grandchildren. She was preceded in death by husband, Blake Williams (divorced); sister, Janet Kay McLain; and daughter, Maureen Elizabeth (Thumper) Williams. Funeral Mass will be at 10:30 a.m. Tuesday, April 13 at St. Edward Catholic Church, 5303 River Rd. N. Keizer, Ore. Arrangements by Keizer Funeral Chapel.

Maureen Beth Williams, 71, of Salem died Friday, April 9 at her home. Maureen was born October 29, 1938 in Great Falls, Montana. Their daughter of Camillus (Mac) and Katherine McLain. At a young age the family moved to Big Fork, Montana where... View Obituary & Service Information

The family of Maureen Beth Williams created this Life Tributes page to make it easy to share your memories.

Send flowers to the Williams family.