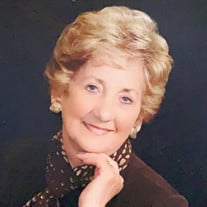 Mary Ellen Hadley (Stutzman) Mary was a loving wife, mother, sister, grandmother and great-grandmother who loved the Lord, laughed heartily, and would deliver wise advice. "A life well lived is a precious gift," and she lived her life well. Mary Hadley passed away peacefully in hospice on Friday, April 8, 2022, after a long struggle with a neurodegenerative disorder. Mary was born on November 2, 1939, to Levi and Mary Ann Stutzman in Watova, Oklahoma. Her Mennonite parents were of Amish descent; she was the 10th of 15 children. She spent part of her childhood in Kansas. When she was 9 the family arrived in Oregon. She attended Sheridan High School and from then on, Mary preferred to focus on all matters attractive and uplifting (real or imagined). Mary reflected warmly on her childhood despite growing up in a humble household full of chores, raised by a heavy-handed father and a virtuous mother. Her parents were tending the farm and raising a very large brood. Mary was raised mostly by her siblings with whom she maintained a close and loving relationship throughout her life. In 1957, at 18 years old, she married Robert Royal who despite his charming public attributes, proved to have poor attributes at home. Bert and Mary had three children: Robbie, Rick and Marci. Their marriage ended in 1976. In 1977, she married Tom Herman and lived in Lincoln City. The move to Lincoln City, beach side, was where Mary found her peace and tranquility. She had a deep love for the ocean. Tom was gregarious, devoted and loving. Through marriage, she became a devoted stepmother to his daughter Maria. Tom and Bert both died within a month of each other in fall 1993. In the spring 1995 she married Lyle Hadley, and they bonded with a deep love for each other and a love for God. She valued Lyle’s children Cathy, Jeannie, Doug and Lori and cherished her time with them. She and Lyle enjoyed an active retirement dancing, traveling, and caring for one another to the end. Mary was a devout Christian and steadfastly loyal in her devotion to the teachings of Jesus Christ throughout her life. In her early life, she was a member of Sheridan Mennonite Church then later a member of Salem Mennonite Church. When she married Lyle, she became a devoted member of the Methodist Church. When given a mission, Mary was creative and courageous. Lyle’s nonagenarian mother asked Mary to plan her future funeral service. Mary took on this mission with zeal and spent many hours researching all things funeral, including programs, hymns, flowers and services. In her quest for perfection, she would dress up and crash strangers’ funerals to get ideas. We always wondered how many Marion County widows and family members still ponder “who was that mystery woman all dolled up at daddy’s service?” The lady who, as soon approached, would excuse herself, pointing to an imaginary acquaintance across the room – and make a quick exit. Mary also had a pragmatic approach to life. Mary’s son Rick recalls a summer between college and medical school, he failed to secure the summer Texas oil rig job he expected. Calling Mary, he said "Mom, how about if I come home, and live the life of an entitled kid? I would like to move back home, spend my days at the beach, hang out with friends and avoid any and all work?” Mary urged him to come home for this wonderful summer. He drove across the country, arriving at home at 2 AM. Mary told him "you better get some sleep, they expect you at the mill at 8 AM.” He spent a labor-filled summer at Fort Hill Lumber Company. She later said his thoughts of the summer of leisure seemed quaint. Mary knew hard work and taught her children that it was a form of worship. She was always proud of her career with Northwest Bell (later Sprint). She began as a telephone operator in Sheridan, and moved up as the go-to administrator to the engineering department in Lincoln City, then Hood River. She enjoyed daily interactions with her coworkers, and impressed (or maybe cajoled) her supervisors to establish a one-time award named: The Mary Herman Award. She worked hard and volunteered through the company speaker’s bureau to teach the area about the world of “telephony.” Mary is survived by her husband Lyle; sons Robbie (Naomi) Royal, Rick (Mitra Battan) Royal; daughter Marci (Mario) Humlie; step-daughters Cathy (Bryce) Kent, Jeannie (Duane) Riddell, Lori (Jeff) Nepstad, stepson Doug (Linda) Hadley; her sisters, Sue Gresham, Dottie (Eldon) Stutzman, Lorene (Victor) Smith, brothers Freeman (Tina) Stutzman, Leon (Jean) Stutzman; sisters-in-law Mildred Stutzman, Katie Stutzman, Dorothy Hadley; brother-in-law Roy Blackstone; seventeen grandchildren, twenty great-grandchildren, and many more nephews and nieces. The world is a little smaller without Mary in it. There is less laughter, the stars are dimmer, and the sun sets a little harder each day. But it is a blessing that the suffering she went through, over these last years, is finally over. Our memories of her will always be accompanied by a smile. Viewing will take place from 5 to 7 PM Friday, April 29 at Keizer Funeral Chapel.. Services will be held at Salem Heights Church, Salem, OR at 11 AM on Saturday, April 30. Interment will be held at Sheridan Mennonite Cemetery. If you would like to view the service via LiveStream, please use this link: https://www.youtube.com/watch?v=B7PN0hOyThU The stream will be available 10-15 minutes before the start of the service (approximately 10:45 AM)

The family of Mary Ellen Hadley created this Life Tributes page to make it easy to share your memories.

Mary was a loving wife, mother,...

Send flowers to the Hadley family.