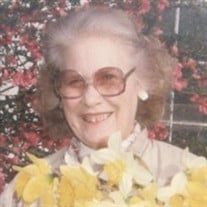 Mary Lorena Barker Chapin, descendent of The American Colonists, Mission-Bottom farm wife, and mother of four children passed away on her birthday on May 10, 2018 in her home at the age of 97 years.   Mary was born on May 10, 1921 in a house her father built at 1285 N. Cottage Street, Salem, Oregon. Her father, Ernest Barker, immigrated to the United States in 1903 from Kings Lynn in England where his family owned a fishing fleet.  Her Mother, Esther Barker, a resident of Salem Oregon, was a descendent of Early American Colonists to the United States, and documented the family genealogy to the Mayflower era. At the age of five, Mary’s family moved out of town to a house along Silverton Rd two blocks east of Lancaster Drive.  This was so far out into the country that her parents allowed her to regularly roller skate in front of her house on the paved section of Silverton road.  She started school when she was six at the Middle Grove School and was quickly advanced to the second grade. Her father was a woodshop teacher at Salem High School.  Each summer when school was out the family would move to Yachats where her father built houses. In those years there were no roads to Yachats so they had to time their trip to coincide with a low tide in order to drive on the beach to get to Yachats. Mary loved the beach and the ocean. During her Junior and Senior year of high school her father decided to work in Yachats year around.  Mary cherished those years on the coast. By then there was a road to Yachats and a school bus to Waldport high school.  She often told of a low spot in the road where the school bus would have to drive through the water during heavy storms. The bus would stop and wait until the wave receded and then quickly cross before the next wave came in. Mary learned to play the piano in the log cabin church at Yachats, now a museum in the center of town. She graduated from Waldport High School in 1938 where she was student body president and Valedictorian of her graduating class. Though the family moved back to Salem, she continued to love the beach for the rest of her life. Mary attended Willamette University where she received a degree in English in spring of 1942. In the fall of 1942 through the spring of 1944 she taught English at Dallas High School. On Dec 22, 1942, she married Jack R. Chapin who she met at Willamette University.   They moved to Mission Bottom in the Clear Lake district north of Salem where Jack was starting a farming business.  The Chapin Farm was her home for the rest of her life, and where she raised four children who all attended grade school at Clear Lake Elementary School.  She was active in community affairs including the school board where she served as the Clear Lake School district secretary, and was active in the Clear Lake Community Club, ladies Home Extension group, and the Oregon Farm Bureau Women’s Committee. She was a Cub Scout Den Mother, a Sunday school teacher, and a 4-H sewing teacher. She attended wrestling matches, crew meets, horse shows, school programs, and choir concerts to name a few. She also made sure her children did their homework and practiced their music lessons. She loved animals and was generally tolerant of the many diverse types of pets brought home by her children and often took on the job of feeding, raising, and taming them. In addition to the usual stray cats and dogs, she helped make pets out of raccoons, fox, wild ducks, pigeons, crows, goats, and bummer lambs. For a few hours she even tolerated having about twenty full sized live carp in her bath tub (the look on her face when she saw them was priceless). She painted pictures of things she loved, the ocean, birds, woods and our unusual pets. Mary loved to camp and travel. She kept the family camper “fire engine ready” for a surprise opportunity to go to the mountains or the coast. Family camping trips were annual events and a source of many happy family memories. She loved to cook and served proper family meals three times a day insisting on correct table settings and table manners. During harvest seasons she packed hot meals and carried them to wherever a family member was working in order to keep the machinery running as many hours as possible during the days and nights when harvest timing was critical. She canned large quantities of garden produce and fruits every summer for use during the coming winter.  One of her trademarks was her whole wheat bread made every Saturday morning after the wheat had been ground by one or all of her four children. She was the farm business bookkeeper, chief financial officer, family mediator, spiritual anchor, voice of wisdom, and family moral compass.  Mary is survived by her four children: Ron M. Chapin, born in 1957, an engineer, owner of a nursery and micro-plant propagation business, and hazelnut grower; Bruce R. Chapin, born in 1951, a cherry and hazelnut grower and an owner of a hazelnut cleaning and drying facility; Jerry L. Chapin, born in 1946, a retired engineer and Director of the Army Tank and Automotive Research and Development Center; and Joyce Chapin Hirsch, born in 1944, a Professor of Neuroscience and Director of the Brain Function Laboratory at Yale University; and their spouses Shelly Chapin, Velan Chapin, Kay Chapin, and James Rothman, respectively.  Her legacy also includes 14 grandchildren and 32 great-grandchildren.   Memorial service 10:00 am, May 18, 2018 at Labish Center Evangelical Church, 7114 Labish Center Rd. NE, Salem, OR 97305. Memorial gifts can be given to the Labish Church.

Mary Lorena Barker Chapin, descendent of The American Colonists, Mission-Bottom farm wife, and mother of four children passed away on her birthday on May 10, 2018 in her home at the age of 97 years.   Mary was born on May 10, 1921 in a house... View Obituary & Service Information

The family of Mary Loren Chapin created this Life Tributes page to make it easy to share your memories.

Send flowers to the Chapin family.