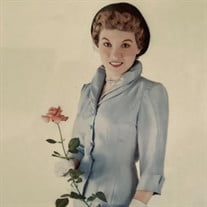 Marjorie Lucille (Michel) Carlson Marjorie entered Heaven on September 19, 2021 at the age of 91. She was born in Chicago, Illinois on October 24, 1929 to Dr. William J Michel and Lucille Dean Michel. The youngest of three children. Marjorie enjoyed a happy childhood and grew up in Chicago and Evanston, Illinois. An honor student, Marjorie graduated from North Park Christian Academy (where she first met her future husband). Following graduation, she attended Northwestern University and graduated from the National College of Education with a Bachelor of Education degree. In Chicago, September of 1953, Marjorie married Dr. Roland Carlson, DDS, a graduate of Northwestern University Dental School and an officer in the United States Army Dental Corps. Roland was stationed in Illinois, California and Alaska. Within a few years of marriage, they made the decision to move to California. The Carlsons lived in Santa Monica and Palos Verdes for a few years then settled permanently in Laguna Hills. Roland established his dental practice and Marjorie assisted him in the dental office until 1965. In September of 1965, to their great joy, their daughter was born. She was named Jennifer Lucille in honor of her grandmothers, Roland’s mother Jennie and Marjorie’s mother Lucille. As Christians, their church was always an important part of their lives. Over the years Roland and Marjorie had the joy and privilege of serving in a number of areas in the church. Roland was an Elder and Marjorie taught Sunday School. They served as host in the new member classes as well as sponsoring Adult/Senior Fellowship Groups. Following Roland’s passing in 1998, Marjorie moved to the Leisure World Retirement Village in Laguna Hills (now Laguna Woods), where she lived until 2013. In October of 2013, Marjorie moved to Keizer, OR (Salem area) to live with her daughter, Jennifer, and twins granddaughters Jadyn and Jordyn. The following years were busy and very happy as she enjoyed being with Jennifer and being “grandma” to the twins. Marjorie was preceded in death by her parents, husband Roland, brother Bill (William J Michel 3rd) of Culver City, California and sister Carolyn Michel of Laguna Woods, California. She is survived by her daughter Jennifer and granddaughters Jadyn and Jordyn of Keizer, Oregon. Throughout her lifetime Marjorie was very grateful for her many blessings. She loved the Lord, her family and many dear friends. It was her hope that with the Lord’s help her life might be a reflection of the Fruit of the Spirit (Galatians 5:22)

Marjorie Lucille (Michel) Carlson Marjorie entered Heaven on September 19, 2021 at the age of 91. She was born in Chicago, Illinois on October 24, 1929 to Dr. William J Michel and Lucille Dean Michel. The youngest of three children. Marjorie... View Obituary & Service Information

The family of Marjorie Lucille Carlson created this Life Tributes page to make it easy to share your memories.

Send flowers to the Carlson family.