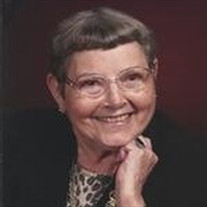 Keizer-Marie passed away on November 27, 2011. She was born in Stevensville, Montana on August 27, 1930. Marie grew up in Molalla and graduated from Molalla High School. In 1950 she married Ernie Bronson on New Years Eve in Molalla. Marie raised two children, Dan and Brenda. After her children were grown, Marie went to work as a dental assistant for many years. In 1992 she retired and moved to Keizer. She always said she could live anywhere as long as her children were close. Marie was a member of First Christian Church. She believed strongly in the power of prayer and loved the Lord. She loved going to garage sales, eating dessert, the color blue; she enjoyed reading as well as watching her two favorite shows, Oprah and Dr. Phil and attending the grandchildren's sports activities. She also liked to go to the Senior Center for lunch with her friends. She also loved a good laugh and a good joke. Family was very important to Marie, first and foremost her grandchildren and children. She loved to have a big and hearty laugh. She loved most of all visiting her family and friends. Marie is survived by her son, Dan (wife Heidi) Bronson; daughter, Brenda Bronson- Kenady (husband Scott Kenady); sister, Anita Marson; brother-in-law, John Marson; and brother as well as grandchildren, Heather, Kristin, Andrew, Hayden and Ashton; and several nieces and nephews. She was preceded in death by her husband, Ernest; parents, Albert and Anna Lawrence; and brothers, Bob, Roy, Charles, Duane, Leonard, and Raymond Lawrence. Visitation will be held on Thursday, December 1st from 3 to 5p.m. at Keizer Funeral Chapel. A funeral service will be held at 1p.m. on Friday, December 2nd at the First Christian Church, 685 Marion St., Salem, followed by burial in Adams Cemetery, Molalla, at 3p.m. In lieu of flowers contributions may be made in her memory to Marion County CASA which is a program Marie was a huge supporter of. CASA is a non-profit program that aids abused children.

Keizer-Marie passed away on November 27, 2011. She was born in Stevensville, Montana on August 27, 1930. Marie grew up in Molalla and graduated from Molalla High School. In 1950 she married Ernie Bronson on New Years Eve in Molalla. Marie... View Obituary & Service Information

The family of Marie "Lawrence" Bronson created this Life Tributes page to make it easy to share your memories.

Send flowers to the Bronson family.