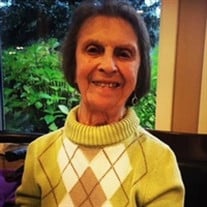 Margaret Janice (Helgerson) Waite’s heart had been longing to see her Saviour...and she flew as a bird and was reunited with a host of loved ones on June 30, 2018. Margaret Janice (Helgerson) Waite was born in Utica, Wisconsin to Helge I. Helgerson and Ruth Oleda (Nederloe) Helgerson. She spent her youth surrounded by a strong Norwegian family and grew into a bright, lovely young woman with an engaging personality, much loved and admired by her family and friends. The Helgersons were a musically-gifted family, and Margaret’s share of that gift was a beautifully-clear contralto voice. She used it well and often, singing at events and in the special girl’s ensemble at Roosevelt High School where she attended and later graduated. She played violin in the all-city orchestra and was in the all-city choir. In her class yearbook, she chose her motto as “A good heart is better than all the heads in the world.” How very true that is, and we can reflect on that sentiment and see how it spoke to her nature – her good, kind heart and her love for others.She married Charles Rene Waite, on March 14, 1957 and they had four children whom she doted on, and loved so dearly: Karen, Kristine, Philip and Darin. She was always in the kitchen, cooking up batches of klub soup, kringlas, and all other kinds of Norwegian goodies.Her family was her life. She leaves behind a beautiful legacy to 9 grandchildren, 10 great-grandchildren (with one on the way), and 1 great-great grandchild. She was preceded in death by her parents Helge (in 1979) and Ruth Helgerson (in 1998), brothers Arthur Obed and Paul Frederick, and sisters Nora Vivian and Constance (Connie) Marie. She has been reunited with her sweetheart of 53 years, Charles Rene Waite, who passed away in 2011, and with their beloved daughter Kristine Allison (Waite) Unger, who has been waiting for her in heaven since 2001.Survivors include her brother Harland Ralph (Kay) Helgerson and sister Barbara (Helgerson) Mineau, daughter Karen McMillen (Jim) and sons Philip and Darin (Amy), and a large extended family including lots of nieces and nephews. Diagnosed at an early age with rheumatoid arthritis, in 2015 her failing health made it necessary for her to move to Avamere Court at Keizer.  We’d like to thank the amazing staff who took such good care of her and treated her with kindness and dignity. Our thanks also go to Peace Lutheran staff, those who gave flowers and memorial gifts, and to all who gave their love and support in times of sickness and sorrow. The Margaret Helgerson Waite Family

The family of Margaret Janice Waite created this Life Tributes page to make it easy to share your memories.

Margaret&#160;Janice (Helgerson) Waite’s heart had been longing to...

Send flowers to the Waite family.