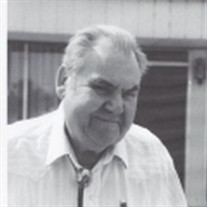 Madison Lee Isley July 27, 1927 - February 2, 2012 SALEM - Madison Isley was born to Madison and Belle Isley, on the family homestead known as "The Divide" in Wallowa County, Oregon. He had five older siblings; Alvin, Alfred, Bessie, Violet, and Mabel, all deceased. He went to school in Joseph, Oregon, graduating from high school in 1945. In 1952 he married Rose Marie Davis. They had two children; Wanda and Les. Matt and Rose Marie were married 49 years when Rose died suddenly in 2001. Matt spent many years farming in Wallowa County. He and the family moved to Salem, Oregon in 1967 where he went to trade school to become a meat cutter. He worked many years in this field and owned his own meat cutting and butcher shop in Siletz, Oregon. In 1998 "Matt and Rose decided to move to Hermiston, OR for the drier climate. On April 18th, 2003, Matt married Mary Crouse in Hermiston, Oregon. Mary brought him much joy and companionship for the remainder of his life! She could always make him laugh. They were married for eight short, but happy, years! Matt loved everything outdoors especially fishing, hunting, and camping. He and Mary went fishing together when they were 82 years old! He also loved music and could often be found at family gatherings with his guitar in hand! Matt was a Christian whose faith was strong! He was ready to go home to his Savior! Matt is survived by his wife Mary, his children Lester Isley and Wanda Daimler, six grandchildren, and 11 great grandchildren. He was a devoted husband, father, and grandfather. Since Matt was the "baby" of his family, he had many nephews that he grew up with. He has stayed close to all of them and their families through out his life. They all lovingly refer to him as "Uncle Mattie". He will be greatly missed by all! A memorial service is planned at the Faith Presbyterian Church in Hermiston, Oregon on Saturday, February 11, 2012 at 12noon. A fellowship luncheon will follow.

The family of Madison Lee Isley created this Life Tributes page to make it easy to share your memories.

Send flowers to the Isley family.