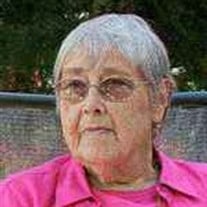 Lorita Rita Muriel Graves passed away on October 17, 2009, at the age of 81. She was born in Salem, Oregon on August 28, 1928, the daughter of Harmon and Lilias Garrett. Rita lived her life in Salem, attending Highland Grade School, Parrish Junior High School, and graduated from Salem High School in 1946. She also attended Oregon State University for a year. Rita married her high school sweetheart, Donald L. Graves, on July 25, 1948, in a beautiful backyard wedding at her parent's home. They were married for 20 years and had 5 children. Rita made her career with the Salem Hospital. During her career she held several positions including lab tech, surgery tech, pharmacy tech, C.N.A., and unit clerk. She retired from the hospital in 1990 and provided daycare to four of her grandchildren. Rita was a woman of many talents and interests. As a child, she collected dolls, including dolls from around the world. Rita was an accomplished seamstress and costume designer. She designed and sewed costumes for baton-twirling and dance recitals; she was the lead costume designer for several plays at the Pentacle Theater; she made custom wedding dresses and bridesmaid dresses for friends and family; and sewed countless uniforms for Salem's first drum and bugle corps, the Flamingo's. Rita greatest joys were being involved with her children. She was a Campfire Leader when her daughters were young. She was the Uniform Director for the Flamingo's when all 5 of her children were members and traveled extensively with them. Later in life, Rita took up skiing. She skied regularly at Mt. Bachelor with family and friends. She also rode the Mt. Hood Meadow's Wednesday Ski Bus for 20+ years, enjoying the skiing and the many friends she made on the bus trips. Rita is survived by Donald L. Graves, daughters Shannon Graves, Gayle Dundon Jim, Jill Petersen Terry of Salem and sons Larry Graves Debbie and Randy Graves of Bend; grand children Lisa Graves Kellstrom Slater; Tony and Annie Dundon, Kevin Graves, and Tyler Petersen; great granddaughter Taya; brother Glen Garrett Virginia of Portland, brother-in-law Ken Kathy Graves and 3 nephews; and friends Sybil and Ken Chesley, who took special care of her in recent months. Rita will be remembered most for how much she loved her family. Her greatest gift to life was being "Mom" and "Grandma" to anyone that needed her. She touched many lives; her kindness and generosity will be greatly missed. We love you and miss you! Family and friends of Rita are invited to services Friday 10/23/09 at 11 AM, at Keizer Funeral Chapel. Contributions can be made to the Willamette Valley Humane Society.

Lorita Rita Muriel Graves passed away on October 17, 2009, at the age of 81. She was born in Salem, Oregon on August 28, 1928, the daughter of Harmon and Lilias Garrett. Rita lived her life in Salem, attending Highland Grade School, Parrish... View Obituary & Service Information

The family of Lorita "Rita" Graves created this Life Tributes page to make it easy to share your memories.

Send flowers to the Graves family.