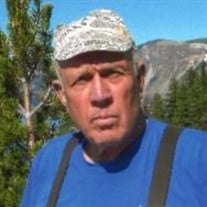 Not sure what to send?

Larry Wonn Preedy January 11, 1939 - January 19, 2022 Larry Preedy, 83, passed away at his home in Keizer, Oregon on Jan. 19, 2022 from COPD. He is survived by his wife of 61 years, Alice (Jacobs) Preedy and children Steve (Mimi) Preedy, Kathy (Henry) Gowen, Jennifer (Scott) Henry, 7 grandchildren, 7 great grandchildren and sister Jan Black. He was preceded in death by his brother Tim Preedy. Larry was born January 11, 1939 in Satanta, Kansas to Clarence and Ethel Preedy. His family soon moved to a farm near Liberal, Kansas. He graduated from Liberal High School in 1956 and four years later married Alice. Larry proudly served in the National Guard. After graduating from high school, Larry worked as a fabrication welder and also worked in the oil fields while farming with his father. Larry and Alice started their own farm in 1967 and raised irrigated alfalfa, wheat, milo and cattle. He also had a trucking business hauling cattle and grain. In 1977 Larry and Alice made the decision to move to the Pacific Northwest and raise their family in Philomath, Oregon. This was risky because Larry was not sure what he would do in Oregon, but within a few months he purchased a small excavation business and was off and running. Still a farmer at heart, they purchased land near Airlie, Oregon and planted 20,000 Christmas trees. After the trees were harvested, they planted a 40 acre grape vineyard. When the grapes started producing, they built and started Airlie Winery. Larry also served on the Board of the Oregon Winegrowers Association. Larry was not afraid to take chances, he enjoyed challenges, and worked hard to be successful. Larry would lend you a hand without being asked, was honest and had a high level of integrity. He could also build, repair, paint, modify and fix just about anything. For example, when he needed a rain cover canopy for his sporting clays shooting golf cart, rather than buy it, he purchased a sewing machine and made it himself. Larry loved to hunt pheasants and quail in Kansas, chukars and elk in eastern Oregon, and target shooting at his local gun clubs. He also built and raced micro midgets, dune buggies, and flew model airplanes. Larry will be greatly missed. In honor of Larry, there will be a gathering of family and friends at Airlie Winery on Saturday, July 23, 2022.

The family of Larry Wonn Preedy created this Life Tributes page to make it easy to share your memories.

Send flowers to the Preedy family.