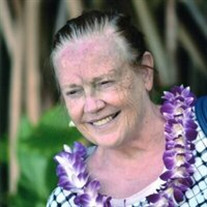 “If Love Could Have Saved You, You Would Have Lived Forever” Kathryn (Kathy) Ann Ryan was born on April 22, 1954 in Bethesda, Maryland to Ray Leland Clark and Audrey Ann (Larson) Clark. The oldest in a military family of five children, Kathryn travelled a great deal at a young age. Her four siblings were subsequently born in Naples Italy; Taipei Taiwan; Lemoore California; and San Diego, California. When she was in High School in San Jose, Kathy developed a passion for environmental issues. Building on community support she set up a recycling center and developed a thirty-member Teachers Corps of high schoolers charged with teaching grade schoolers the how-to’s of ecological living. Her passion culminated when, as a high school senior in 1972, Kathy took her passion for the environmental to Stockholm, Sweden where she made a presentation at the Environmental Forum during the United Nations Conference on the Human Environment. Ms. Clark saw the UN as the organization to deal with the environmental global crisis, and she called for a 7th organ of the UN called the Global Environmental Authority with equal stature to the General Assembly, and the Security Council. She went on to get her college degree in Advanced Environmental Studies from San Jose State University. Kathy loved to travel. When she was 21 years old, she signed on with other young people to crew a 150’ schooner on a trip to Tahiti. She went by herself on a 2-month backpacking trip to Australia. She loved her trips to Africa to see the wild animals. Selected by the District #519 Rotary International Group-Study Exchange Team Member to South India, in January 1988 she went to share experiences and culture with her Indian counterparts and learn more about the country, including visits to historic sites like the Taj Mahal. She took several trips to places including Europe, Hawaii, the Caribbean, Mexico, Alaska, and Iceland. She could proudly claim to have visited all 50 states of the United States. As an adult, Kathy applied her love for the environment to jobs in government including four years with California Parks and Rec. Two of those years she was the Regional Administrative Officer at Santa Rosa, California. In 1990, she took a job at the Oregon Parks and Recreation Department as an Assistant Director and moved to Salem, Oregon. She was proud of her time at OPRD, and eventually became the Area Manager for all parks in the Willamette Valley. In 1996, she transferred to the Oregon Department of Transportation, where she held management positions in District highway maintenance, Regional highway maintenance, Support Services, and Drivers and Motor Vehicles. She was an avid reader and researcher, with a keen intellect and strong work ethic. To those who knew her, she was a great supporter in their careers, a forward thinker with tireless energy to do the right thing, even when it was hard. In June she was recognized for 30 years of state service in Oregon, in addition to her 12 years with the state of California. Kathryn had a passion for animals and was especially drawn to small animals like bunnies and Corgis that she treated like her children. In her last wishes, she asked that any donations in her memory be made to the Willamette Valley Humane Society. Kathryn passed away on October 9, 2020 after a fierce battle with cancer. She is survived by her parents, her four siblings, and all who knew and loved her.

&#8220;If Love Could Have Saved You, You Would Have Lived Forever&#8221; Kathryn (Kathy) Ann Ryan was born on April 22, 1954 in Bethesda, Maryland to Ray Leland Clark and Audrey Ann (Larson) Clark. The oldest in a military family of five children,... View Obituary & Service Information

The family of Kathryn A. Ryan created this Life Tributes page to make it easy to share your memories.

“If Love Could Have Saved You, You Would Have Lived Forever”

Send flowers to the Ryan family.