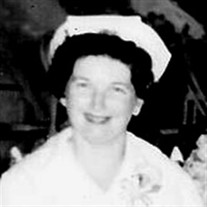 SUBLIMITY - June Eleanor Laundry passed away on October 17, 2012 in Sublimity, Oregon. Born on October 6, 1924, in Somerville Massachusetts, she was the daughter to Roger and Hazel (Warren) Proudfoot. On February 2, 1944, June married Frank W. Laundry, USAF, of Montpelier, Vermont. Following their marriage, they made their home in Montpelier and Bradford, Vermont after World War II. While living in Montpelier, June was active with the Theater Guild and had the lead in "High Fever" by Noel Coward. When WSKI was a fledgling radio station, she was the "Story Lady". June was an American Legion Auxiliary member since 1948, mostly with the Bradford Unit #20, where she served as president, chaplain, and secretary over the years. She sang in the church choirs in West Roxbury, Massachusetts and Bradford. In Vermont, she raised chickens, selling dressed broilers, eggs, capons, and individual chicken pies until enrolling in the Hanover School of Practical Nursing at Mary Hitchcock Hospital in Hanover, New Hampshire, graduating in 1960. She was on the staff at Mary Hitchcock for 16 years; eight an ICU staff nurse and six on the CCU staff. For several years she was an active member of the LPN Association of New Hampshire, serving as president in the district office and serving as vice president on the state level. She moved to Oregon in 1976 and served nearly 11 years on the CCU staff at Salem Hospital, retiring in 1987. After her retirement, she moved to Largo, Florida, and worked three years for the Metro Health Care Agency covering all of Pinellas County. As a member of St. Dunstan's Episcopal Church, she did volunteer work and also belonged to the American Red Cross Disaster Unit. In the summer of 1991, she returned to Lyons, Oregon, and attended the Christ the King Episcopal Church in Stayton. June was a regular library volunteer as well as a member and chair of the Lyons Library Board. She was well known for many years as the "Story Lady" at local schools and the library. She was also active with "Citizens for a Better Community" in Lyons and volunteered at the Marion-Polk County Gleaners. She received the 1995 Distinguished Service Award for Mehama-Lyons and in 2000, received the Woman of the Year award. June was very fond of the outdoors, gardening, bird watching, traveling, and hooked many rugs, but reading was her main love. She resided in the home of her daughter in Lyons after providing 14 years of caregiving and companionship to her friend, Clarence (Tiny) Goodell. She is survived by her children, Jerry (Frank J. and Lynn) Laundry of Bradford, Vermont; Don (and Sue) Laundry of West Warwick, Rhode Island; and Nancy Laundry of Lyons, Oregon; as well as 3 grandsons. Her husband, Frank Laundry, preceded her in death in 1980. Her brother, Earl Lovejoy Jr. died in 2011. Interment will be at the West Bradford Cemetery, Vermont, with Christian service by St. Martin's of Fairlee, Vermont, and ALA Unit #20. Keizer Funeral Chapel and Ricker Funeral Home of Woodsville, NH are in charge of the arrangements. Contributions in her memory may be made to the Oregon Garden, Lyons Public Library or Bradford Public Library.

SUBLIMITY - June Eleanor Laundry passed away on October 17, 2012 in Sublimity, Oregon. Born on October 6, 1924, in Somerville Massachusetts, she was the daughter to Roger and Hazel (Warren) Proudfoot. On February 2, 1944, June married Frank... View Obituary & Service Information

The family of June Eleanor Laundry created this Life Tributes page to make it easy to share your memories.

Send flowers to the Laundry family.