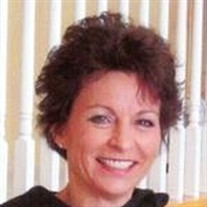 Joyce Krueger of Salem, Oregon was born in Des Moines, Iowa to Marian and Arlo Godlove on January 19, 1950. After living her life to the fullest, she went to be with the Lord on March 24, 2011. She graduated from Southeast Warren High School in Liberty Center, Iowa. Joyce enjoyed cheerleading, was as FFA sweetheart and Homecoming Queen. She began her career at the Historical Society of Iowa. Soon after, she became a flight attendant with United Airlines.. After 24 years she retired from United and embarked upon a career as an Executive Flight Attendant for several major corporations, then finalized her career as Manager, Customer Experience for a large aircraft charter company. Joyce was a Willamette University Graduate. She did post graduate studies in Interior Design. She was an accomplished Interior Designer. Joyce was very active in the Salem community. She was past president of the Salem Hospital Auxiliary, past president of the American Association of University Women, a member of the Assistance League of Salem, a member of PEO chapter CQ, and was involved with the Keizer Junior Miss program for several years. She was also past president of the McNary Womens Golf Association. Joyce enjoyed traveling, reading, art, running and working out, golf, and she really enjoyed her many friends. Recently she became a Catholic at St. Edward Catholic Church in Keizer, Oregon. Joyce is preceded in death by her father Arlo Godlove. She is survived by her husband of 28+ years, Thomas J. Krueger, her mother Marian Godlove of Milo, Iowa, and her siblings Jackie Morris, Ron Godlove, Karen Kleymann, Lori Frazier, and Becky Jo Becker. Stepchildren Tom Krueger Jr., Jeff Krueger, Lee Krueger, Les Krueger, Jennifer Hawkins, niece and god daughter Kriste Lahmann, 3 additional nieces, 12 nephews, 1 great nephew, and 9 grand children. A Funeral Mass will be held on April 2, 2011 at 1 lam at St. Edward Catholic Church of Keizer, Oregon with a public viewing starting at 10am, reception following the Mass. Arrangements by Keizer Funeral Chapel. In lieu of flowers, donations may be made to either the Salem Hospital Auxiliary or the Assistance League of Salem.

Joyce Krueger of Salem, Oregon was born in Des Moines, Iowa to Marian and Arlo Godlove on January 19, 1950. After living her life to the fullest, she went to be with the Lord on March 24, 2011. She graduated from Southeast Warren High School... View Obituary & Service Information

The family of Joyce Elaine Krueger created this Life Tributes page to make it easy to share your memories.

Joyce Krueger of Salem, Oregon was born in Des Moines, Iowa to...

Send flowers to the Krueger family.