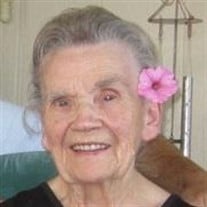 JOY JENKINS BEHLING Joy Behling was called home by her Heavenly Father on February 12, 2022. She was one year & 2 months short of becoming a centenarian. She was born April 22, 1923 in Logan Utah, to Dale Sedden and Florence Malinda Ball Jenkins. She was the 2nd of 5 siblings; Ruth Wells, Dale Jenkins, Verla Spring and Connie Nye. Her mother died when she was 8 years old and the family was raised by their father and at times, their grandmothers. She often shared about the hardships of growing up without a mother and was grateful to the strong women in her life. She graduated from Logan High School and worked at her Uncle’s local Hardware store. She loved to roller skate, spending many hours at the local rink and becoming very good at it, performing with others and dancing on her skates. She was very proud that she hand-sewn her own skate dress, which she had kept all her 98 years, along with her size 5, wooden-wheeled roller skates. She sometimes let her grandchildren try on her skates and skate around her vinyl-floored kitchen, but never outside! It was at this rink in Logan where she met the love of her life, Robert A. Behling, who was enrolled at Utah State Agricultural College. She must have made an impression as he asked for her phone number and wrote it in his ‘little black book’. They spent some time together, then went different directions only to surprisingly meet again in San Diego, where she had moved for a nanny job on the military base there. This time she had gone to a local church dance and was asked, by a young, handsome man, for a dance. They again enjoyed each other’s company and when he pulled out his ’little black book’, lo and behold, her name was already in there!! Shortly after, they eloped to Yuma AZ and then moved to Pomona. Robert enlisted in the Army and their first son, Conway was born 3 months before he was shipped overseas. At that time Joy and Conway moved to Kaysville, Utah, to live on Robert’s parents’ farm. Joy was supported again by a strong mentor, Grandma Behling. Upon his return, they settled in Kaysville, and together had 7 more children. Joy was mostly a homemaker, raising her children and gardening. She loved flowers! She could always be found outside tending to one flower bed or another and always had a fresh bouquet in the house. She was most happy when she was working in her yard, right up until she was 96 years old, living in her own home. There was always a vegetable garden for harvesting fresh food every year. What couldn’t be eaten right away, was canned for future use. Joy and Bob also had acres of orchards with various fruit trees. After harvest of peaches, she would be outside sorting and selling them to the public. It was a huge job, especially with 8 children! But she did it willingly and loved meeting people that came from miles to purchase the famous Behling peaches. Upon Bob’s retirement, they moved to Oregon in 1975, where they made their home for many years. Joy worked in the family-owned NAPA Auto Parts store in Dallas until she was replaced by a computer. Upon her retirement, she enjoyed shopping trips to the coast, collecting dolls, scrapbooking, photography and making photo albums for all of her children and grandchildren. She loved hosting large family get-togethers and doted on her children and grandchildren. She took up oil painting in her 70’s. She joined the Truth Tabernacle Church in 2001 and moved to Keizer a year later, where she continued her love of gardening and making many new friends. Joy will be missed terribly. She is survived by her sister, Verla, children; Conway (Susan) Behling, Marilyn Anderson, Jon Craig Behling, Pam (Bob) Grove, Cory Behling, Wendy Cerdena and 13 grandchildren and 27 great-grandchildren. She is predeceased by her parents, husband, Robert, four siblings, son, Brian Ron, daughter, Judi, granddaughter, Amanda and sons-in-law, Mark Cerdena and Brent ‘Andy’ Anderson. Family viewing at 9:30 am, public viewing at 10:30 am and service at 11am, will take place on March 1, 2022, at Truth Tabernacle Church, Keizer, OR Interment to follow 1 pm, at Restlawn Memory Gardens, Salem OR

JOY JENKINS BEHLING Joy Behling was called home by her Heavenly Father on February 12, 2022. She was one year & 2 months short of becoming a centenarian. She was born April 22, 1923 in Logan Utah, to Dale Sedden and Florence Malinda Ball Jenkins. She... View Obituary & Service Information

The family of Joy Jenkins Behling created this Life Tributes page to make it easy to share your memories.

Send flowers to the Behling family.