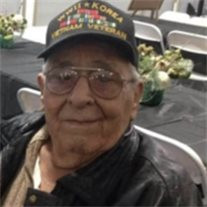 John R Vierra was born March 6, 1928 in Oakland, California to John and Emily Vierra. John passed away on March 8, 2021. At the young age of 16 he joined the Merchant Marines during WWII and served aboard a merchant ship. John received the Philippine Liberation Ribbon, Pacific War Zone Bar and Victory Medal for service in WWII. He received an Honorable Discharge in August 1945. On January 23, 1946 John enlisted in the U.S. Marine Corps. His first duty station was in Hawaii where he was the Motor Vehicle Dispatcher. He received the American Defense Service Medal, American Campaign Medal WWII and Asiatic Pacific Campaign Medal WWII. Honorable Discharge in October 1947. From 1947 to March of 1948 John worked at the Atlas Diesel Company and then March of 1948 to May 1949 he attended Lamay Trade School, both in Oakland. John Joined the U.S. Army on May 9, 1949 in San Leandro, California. He was sent to Atlanta, Georgia to Army Ordinance School in October, 1949. It was during this time that he met the love of his life!! On June 28, 1950 he married Nannie L. Payton in Avondale Estates, Georgia. They had seven children over the next 10 years. Their first home was in Colorado Springs where he was assigned to an Engineer Unit in Wheel Vehicle Maintenance & Repairs. In 1952 the unit was assigned to Salzburg, Austria where he was responsible for vehicle maintenance during the building of Camp Roeder. In March 1953 in Salzburg their first child was born. He then received orders in May 1954 for Fort Lewis, Washington and would be assigned to the 498th Engineer Battalion. In November 1954 he received orders to Ford Ord, California. The first job was to build 30 miles of road from San Simeon to Hunter Liggett Military Reservation. In July 1956 John received orders to go to Korea and was assigned to Camp Saint Barbara. His assignment was motor Sgt and later was assigned as the 1st Sgt. January 1958 he was again assigned to Fort Lewis, Washington where he received training as a tank commander. In April 1959 was assigned to the Army Advisory Group. In 1962 John received orders for Germany. His wife and five daughters joined him and they lived in Kitzigen until 1965. His one and only son was born in Germany in November 1963. He then received orders for Fort Lewis and then amended orders to U.S. Army Advisory Group in Salem, Oregon. He was the Personnel Sgt. And his job was personnel records. Payroll as well as advisor. He was promoted to E8 Master Sergeant. In 1968 John received orders for Vietnam and was assigned to HQ MacV as operation Sgt. He then requested assignment to the field and received orders to TM9E, Bien Hoa as 1st Sgt. In July 1969 John received orders to return to Fort Lewis. He commuted from Keizer to Fort Lewis weekly until his retirement from the Army in 1970. In November of 1970 John became a mail handler with the USPS and then in April 1971 he became a letter carrier. He retired from the USPS on March 6, 1990. July 4, 2015 during the Veteran Celebration at Volcano Baseball Stadium John’s brother Joey Vierra was honored as a Fallen Soldier. John threw the first pitch and his Great Grandson, Dax Fancher ran the bases. John was extremely proud to have been involved in this event. In October 2015 John took part in the Honor Flight to Washington DC. He was so excited to be part of this event and was so proud to have his grandson Matt Seely along to share the memories. The visit to the Vietnam Memorial Wall was painful for John as his youngest brother Joey Vierra was killed in Vietnam on March 2, 1967. John, to say the least, loved playing bingo at the Boys & Girls Club in Salem. You could find him there most any time that the hall was open. He had many friends there and loved the staff. The love that John had for his family showed in everything he did! He always had something fun up his sleeve. From Grandkids scooping up money in their hands at Christmas, to unwrapping a present in a large box to find many boxes within the box and finally getting down to the present, to special Easter eggs with money hidden in them. He showed unconditional love, taught us loyalty and integrity and life lessons along the way. Truly our hero John’s wife, Nan passed away in November 2011. He said that was the saddest day of his life. He also lost four of his seven children prior to his death, Betty, Jean, John and Linda. His surviving children are, Chris Seely, Pattie Toepfer and Cindy Smith (Dave). He was an amazing Grandfather to 10 Grandchildren and 16 Great Grandchildren. This amazing man will truly be missed by all. Viewing will be from 1:00-2:00 on March 20 at the Keizer Funeral Chapel, 4365 River Rd. N. in Keizer. Celebration of Life will be family only on March 20. Private graveside service will be at Willamette National Cemetery on March 22. To send a flower arrangement or to plant trees in memory of John Richard Vierra, please click here to visit our Sympathy Store.

John R Vierra was born March 6, 1928 in Oakland, California to John and Emily Vierra. John passed away on March 8, 2021. At the young age of 16 he joined the Merchant Marines during WWII and served aboard a merchant ship. John received the Philippine... View Obituary & Service Information

The family of John Richard Vierra created this Life Tributes page to make it easy to share your memories.

Send flowers to the Vierra family.