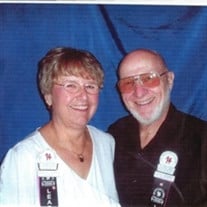 John Frank Juhring March 28, 1940 - February 8, 2013 Keizer - John's family was constantly by his side after being diagnosed with Acute Myeloid Leukemia on February 4 and passing on February 8. John was born in Hempstead, New York, to Martha (Frank) and Otto Juhring. He lived there until moving to California in 1946. He was a loving Husband, Father and Grandfather and is survived by his loving wife of 51 years, Suzette; son, John II; daughter, Lisa Marie; daughter-in-law, Lisa E.; four grandchildren, Dustin, Dillon, Dakota, and Grace Juhring; and sister, Lorraine Graham. John graduated Arcadia High School, California, and served in the Navy for six years. He met his wife, Suzette, in 1957. They were married August 26, 1961 at Holy Angels Catholic Church in Arcadia, California. John worked in Aerospace and the Auto Industry in Southern California until the family moved to Dallas, Oregon, in 1976. In Dallas they opened a 76 Gas Station and eventually John's Auto Service. John retired in 1998 moving to Keizer in 2008 to enjoy playing golf with his wife and son. He enjoyed teaching choreographed ballroom. They started dancing in 1982 and teaching in 1992. They taught continually until the week before his passing. Their club "Rounds aRe Us" has been their extended family and continued support during his illness. He took joy in watching dancers learn. John had a smile that filled a room, kind and loving. He loved his family and was very proud of the achievements of his children and grandchildren. He will be missed by all. Mass will be at St. Mary's Catholic Church in Mt. Angel on Thursday, Feb. 21, 11:00 a.m. followed by a reception in the Parrish Hall after the service. Memorial Contributions can be made to his grandchildren's school, Sacred Heart School in Gervais. Arrangements entrusted to Keizer Funeral Chapel.

John Frank Juhring March 28, 1940 - February 8, 2013 Keizer - John's family was constantly by his side after being diagnosed with Acute Myeloid Leukemia on February 4 and passing on February 8. John was born in Hempstead, New York, to Martha... View Obituary & Service Information

The family of John Frank Juhring created this Life Tributes page to make it easy to share your memories.

Send flowers to the Juhring family.