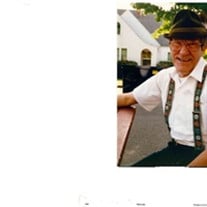 John Joseph Johnk December 30, 1924 - August 29, 2014 John "Jack" Joseph Johnk, 89, of Salem, loving father, big brother and friend passed away peacefully on August 29 after a courageous battle with cancer. He was born in Sioux City, Iowa on December 30, 1924, to Mary Margaret (Bollig) and John Henry Johnk. John was the first of three children with sisters Mary JoAnn and Marcelene Rose. At a young age, John moved to Oregon and eventually the family found their home in Hood River, Oregon. John was inducted into the United States Army in July 1943 and served in the Pacific Theater during World War II. He was honorably discharged in February 1946. John remained in the Army reserve, but his love of country and the military drew him back to join the United States Marine Corps in 1950 and serve in the Korean War. He was honorably discharged from the Marine Corps in 1953 after reaching the rank of Sergeant. John continued his military service with the Oregon National Guard for 20 years. After the Marine Corps, John returned to Hood River and found a career with the US postal service. In 1956, he married Edith M. Tennant and raised two sons, Doug and David. He retired from the postal service in 1980. Throughout John's life, he was an active outdoorsman. He enjoyed fishing, hunting and camping. Most of all, he enjoyed being involved with and following his sons' sports activities. John was also a big Oregon Duck fan, especially football. John was happiest watching the Ducks and eating his favorite snacks: sardines, cheese, crackers and sausage. It was a good day when the Pac 12 (Pac 10) cable channel began broadcasting. John loved to dance. Whether it was the polka, waltz or two-step, John could dance them all and not many ladies could keep up with him. He was a regular at the Mt Angel Oktoberfest. John is survived by many family members. His two sons and their wives Doug & Kristen Johnk of Keizer, Oregon and David and Jamie Johnk of Molalla Oregon. His younger sisters, Mary JoAnn McGrath of Roswell, New Mexico, and Marcelene Todd and husband Steve of Salem, Oregon. John's grandchildren are AJ, Connor, David and Jennafer and great grandchildren Anthony, Amelie and Arya. His ex-wife Edith Johnk, long time companion Ruth Arnold and special friend Lorraine Halter. A service will be held Wednesday, September 3, at 10 a.m. at St. Edwards Church in Keizer, Oregon. In lieu of flowers, contributions suggested to a reputable Veterans organization.

The family of John Joseph Johnk created this Life Tributes page to make it easy to share your memories.

Send flowers to the Johnk family.