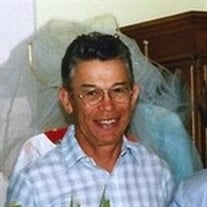 John Paul Groth passed into eternal life on July 24, 2012. In his last days, he was comforted at home by his devoted wife Judy. He was 87 years old. John was born in Newberg, Oregon on October 28, 1924 to Friedrich and Inez Groth. He was the youngest of ten children. He spent his childhood in Dundee, Lafayette and Dayton. Much of his boyhood was spent swimming in the Yamhill River, hunting grey diggers, and fishing. He was a four-year letterman on the Dayton High School varsity basketball team, and graduated from DHS in 1942. Following high school, John enlisted in the United States Navy and served during World War II as an Aviation Machinist Mate 3c. He was stationed at Ford Island Air Station in Pearl Harbor, Hawaii. He was responsible for maintaining a target training aircraft, the Grumman F4F Wildcat. Over the years after the war, he maintained a special regard for World War II-era aircraft, especially the Wildcat. Following his discharge from the Navy, John worked at a variety of jobs before beginning a career as a Draftsman with the Oregon Department of Transportation. He met Judy, the love of his life, in his hometown and they married in 1964. They moved to Salem and raised two daughters. He retired from ODOT after more than 30 years. John was very proud to be an Oregonian. He loved the outdoors, and many family vacations were spent camping, fishing, rock hounding, and hunting for Oregon's mineral treasures. In retirement, John enjoyed cutting and polishing thunder eggs and faceting gems. He was exceptionally detailed and became a highly skilled faceter. John also loved cowboy music, especially fiddle music. John is survived by his wife Judy, daughters Karma Krause and Nancy Groth, sons-in-law George Krause and Brett Robichaud, grandchildren Will Krause and Sabine Robichaud, sister Janet Prater, and numerous nieces and nephews. A celebration of life will be held on Saturday, July 28, 2012 at 1:00 p.m. at Keizer-Clear Lake United Methodist Church in Keizer. Instead of flowers, contributions in John's memory to McMinnville Wildlife Rehab/Feral Cats, 2001 NE Lafayette McMinnville, OR 97128 or to Willamette Valley Hospice are encouraged.

John Paul Groth passed into eternal life on July 24, 2012. In his last days, he was comforted at home by his devoted wife Judy. He was 87 years old. John was born in Newberg, Oregon on October 28, 1924 to Friedrich and Inez Groth. He was the... View Obituary & Service Information

The family of John Paul Groth created this Life Tributes page to make it easy to share your memories.

Send flowers to the Groth family.