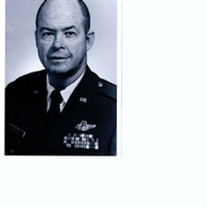 Salem Col. (Ret.) Jack (John) Wofford Suggs of Keizer, OR passed away peacefully in his sleep on April 3, 2014. Born on August 9, 1926 at Ft. Totten, New York, he was the son of the late Lt. Col. (ret.) John Matha and Grace (Hogan) Suggs. Jack grew up in San Anselmo, California, enlisting in the US Army at the age of 17 to serve in World War II. With the conclusion of WWII, in November 1945 Jack was discharged from the AAF at Andrews Field in Washington DC and returned home to live and work in the San Francisco bay area. Having grown up in a military family (on both of his parent's sides of the family) and given his love for airplanes, the lure of military life and a chance to be a pilot soon brought him back to the service of our country, resulting in his acceptance to Officer Candidate School with the United States Air Force in 1949. Jack graduated from pilot school in 1953 and in his later years was known to say that if he had been a little younger, he would have wanted to have been a test pilot in the California desert. During the course of his career, Jack advanced to the rank of Colonel in the United States Air Force, as part of the Strategic Air Command (SAC), serving his country in many capacities, ranging from being a pilot to serving in various command positions, including service during the Korean and Vietnam Wars. On February 28, 1974, following service in Okinawa that included commanding combat refueling operations for bombing campaigns in North Vietnam with no loss of men or planes, Jack was awarded the Bronze Star Medal "for meritorious service as Deputy Commander for Operations, 376th Strategic Wing, Kadena Air Base, Okinawa, Japan, while engaged in combat operations against an opposing armed force from 13 September 1972 to 15 February 1974. During this period the outstanding professional skill, leadership and ceaseless efforts of Colonel Suggs resulted in major increase in mission effectiveness, a perfect safety record and success of the 276th Strategic Wing in meeting all higher headquarters directed combat and reconnaissance tasks in the Western Pacific." Jack retired from March AFB on September 30, 1980, being awarded the Legion of Merit Award and it being commended that " The singularly distinctive accomplishments of Colonel Suggs culminate a distinguished career in the services of his country and reflect great credit upon himself and the United States Air Force." Jack was awarded a BS degree in Industrial Technology from Southern Illinois University, College of Engineering and Technology, in September 1986 and worked in the civilian sector after his retirement from the military. He and his wife, Jan, moved to Oregon in 1992, settling in Keizer where he greatly enjoyed his time on the golf course, rooting for both his San Francisco Giants and the Salem-Keizer Volcanoes, his many years serving as a Docent at the Evergreen Aviation & Space Museum, and the innumerable road trips across our great country. Jack was blessed in life with the love of two women, his beloved wife Jan, who he leaves behind, and his first wife, Evelyn Mary Suggs (Matkovich) who predeceased him in 1982. In addition to his wife, Jan, Jack leaves behind his beloved brother and sister-in-law, Phil and Sharon Suggs of Roseville, CA; his former sister-in-law, Jane Stewart (Jack); six children, Jean Lawler (Tim), Jane Young, Joseph Suggs, Mary Beld (Todd), John Suggs (Sharon) and Dawn Biggs (Derek); fourteen grandchildren, Kathleen Hunt (Patrick), Megan Lawler, Colleen Liberman (Nate), Timothy Lawler, William Young, Rebecca Young, Monica Beld, Michael Beld, Marie Beld, Maureen Beld, Joshua Suggs, Rachel Suggs, Jessica Prokop and Andrew Biggs; four great-grandchildren and many nieces, nephews and wonderful friends. Jack was a happy, outgoing man who loved people and loved life. Active in his church and community, he loved nothing more than to share a good laugh or joke with his family and friends.

The family of Jack Suggs created this Life Tributes page to make it easy to share your memories.

Send flowers to the Suggs family.