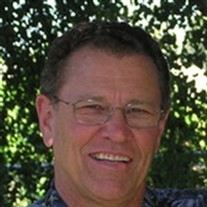 Jack Wilbert Bond April 17, 1945 to January 17, 2011 Jack was born in Tacoma, Washington, the son of Elton and Lila (Bilyeu) Bond. He died after a three year battle with brain cancer. Jack was a 1963 graduate of Albany High School. He served in the U.S. Army in Vietnam as a helicopter pilot - Chief Warrant Officer II - 1966 through 1969. When he returned from Vietnam he was a flight instructor at Fort Rucker, Alabama. He was awarded the Distinguished Flying Cross and the Air Medal with Oak Leaf Cluster. After the Army, Jack worked as a pilot in Alaska for ERA Helicopters. In July 1970, along with a passenger, he survived an emergency landing in the Arctic waters of the Bering Sea for 17 hours. He worked in Louisiana for 18 years for ERA Helicopters and then in Saudi Arabia for ARAMCO, retiring in 2003. During this time his home base was in Panama City, Florida. Jack married Delores Warner on November 24, 2004 in Salem, Oregon. Jack and Delores spent much of their time together visiting family and long time friends. Jack was an avid vintage and collectible car fan and was talented at home improvement projects. Jack is survived by his wife Delores , daughter Jackie (Scott) Charley of Allen, Texas , stepchildren Donnie(Jeanette) Chapel of Lake Charles, Louisiana , Cindy Miller of Wilsonville, Julie Mertz of Salem, Maria (Wayne) Cooley of Dallas, Corey (Lisa) Mertz of McMinnville, Shelly Davis of Portland, sixteen grandchildren, and seven great-grandchildren. He is also survived by brother Paul (Sandy) Bond of Keizer. Interment will be at Bilyeu Den Cemetery near Scio. A Celebration of Life will be held at a later date. In lieu of flowers, the family suggests contributions to the Salem Hospital Foundation, Cancer Fund , P.O. Box 14001, Salem, Oregon 97309-5014 or via online donation at www.salemhospital.org , Support Salem Hospital link. Arrangements by Keizer Funeral Chapel.

Jack Wilbert Bond April 17, 1945 to January 17, 2011 Jack was born in Tacoma, Washington, the son of Elton and Lila (Bilyeu) Bond. He died after a three year battle with brain cancer. Jack was a 1963 graduate of Albany High School. He served... View Obituary & Service Information

The family of Jack Wilbert Bond created this Life Tributes page to make it easy to share your memories.

Send flowers to the Bond family.