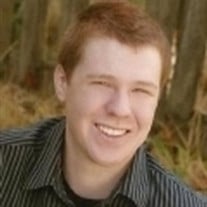 Isaac Clark May 24, 1990 - October 17, 2011 PORTLAND - Our beloved Isaac was taken unexpectedly on Monday, October 17th. He died of head injuries caused from a skateboarding accident. Surrounded by his family at OHSU, Isaac's spirit left his body to be with our Heavenly Father- transcending into a position where we can use his incredible life and memory to teach us about our own lives. In his 21 short years, Isaac has made a significant impact with his intense passion for life and learning. He was a physics and math major at Lewis and Clark College in Portland and achieved the highest academic honor of induction into the Phi Beta Kappa Society at Lewis & Clark as a junior; he was also a member of Sigma Pi Sigma, a national Physics Honor Society. He was looking forward to one day earning a doctorate degree in physics. Isaac was born in Everett, Washington and moved to Keizer before his first birthday. He attended Keizer Christian Preschool, Clearlake Elementary, Whiteaker MS, and McNary HS, where he was a 2008 valedictorian. At the age of 3, Isaac expressed his desire to achieve and to be "special." Isaac was known for studying many hours beyond the school day. He grew up playing soccer, football, basketball, and baseball. Introduced to a drum set at age 13, Isaac entertained his family daily with his self-taught skills- later playing the drums for services at Salem First Christian Church and with his high school band, "Zombie Warrior Enterprise." He took drum and piano lessons at Lewis and Clark and performed in a variety of musical ensembles. There are a variety of ways Isaac deeply touched those he encountered, but without exception, most people are struck by his intelligence and intense passion. Isaac surrounded himself with an eclectic collection of books, reading deeply. He loved to engage his friends and family in conversations on a myriad of topics, like Einstein's theory of relativity. Isaac made several You Tube videos discussing political and academic topics, such as the media's effect on society; and the nonexistence of reality. Isaac had a goofy sense of humor, enjoying the comedians Tim and Eric. In addition to math and physics, Isaac enjoyed studying philosophy, psychology, religion, science fiction, and government. Isaac spent his last two summers engaged in scientific research programs- the summer of 2010 at Lewis and Clark studying astronomy, and the summer of 2011 at Lehigh University in Pennsylvania studying optics. Most significantly, Isaac developed an intensely loving and kind heart, saying "I love you" to family members with each good-bye, and with each text message and phone call. Isaac is survived by his younger sister, Natalie Clark; his mother, Linda Olson; his father, Bud Clark; his stepfather, Bob Olson; his grandparents, Jack and Sandra Pyle and Ed and Bev Clark; stepsiblings, Matt, Kari, and Jeff Olson; and many loving aunts, uncles, cousins and very dear friends. Isaac's memorial service and reception will take place on October 29th at 1:00PM at Salem First Christian Church, 685 Marion Street NE. Anyone interested in making a donation can direct it to the Isaac Clark Memorial Fund for Physics and Math at Lewis and Clark College, 0615 SW Palatine Hill Road, Portland, OR 97219. Arrangements entrusted to Keizer Funeral Chapel.

Isaac Clark May 24, 1990 - October 17, 2011 PORTLAND - Our beloved Isaac was taken unexpectedly on Monday, October 17th. He died of head injuries caused from a skateboarding accident. Surrounded by his family at OHSU, Isaac's spirit left his... View Obituary & Service Information

The family of Isacc Clark created this Life Tributes page to make it easy to share your memories.

Send flowers to the Clark family.