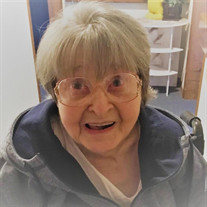 Ione Hazel Dunlevy James Ione James passed away peacefully on Saturday, September 11, 2021 at her residence in Salem, Oregon. She is now with The Lord Jesus in Heaven and in perfect health. She was such a character and so much fun – Ione will be greatly missed here on earth. Ione was born on April 14, 1927 in Sempronius, New York to John Dunlevy and Hildred Stinton Dunlevy. She was truly a middle child of seven Dunlevy children – coming after Clair, Della, Alice, and before John Junior, Florence, and Betty. She lived on the family farm in New York until 1934. In 1934, when she was only 7 years old, she and her entire family traveled across the country to a new farmstead near Cottage Grove, Oregon. It was an amazing trip in an old truck that took 2 months to complete. Her mom was expecting her sister Betty at the time. When they first arrived in Oregon, her dad made sure that the family attended community church where Ione accepted Jesus as her Savior. The Dunlevy household was a busy place with a lot of chores for everyone. But there was fun too because her neighbors had many large families with kids to play with. She became best friends with a neighbor named Robirda Flaten, and Ione named her daughter after her close friend. Ione attended Cottage Grove area schools and graduated from High School in 1945. She worked at various places that included Eugene Fruit Growers and Eugene Auction. She would take a bus to work with her sisters or get a ride from her dad when he was still alive. After a few years, she met her future husband – George James who farmed in the Salem area. Ione and George were married in 1951 in Clark County, Washington, and began farming in Keizer and later Independence. The farm was always a busy place and she worked hard to help feed and manage the farm hands. After several years, along came their bundle of joy in 1959 when their only child Robirda Lynn James was born. Ione was widowed in 1967 when George suffered a fatal heart attack. She and Robirda moved off the farm and settled in Keizer. It was a difficult time for both of them, and God provided a way to make it through. In 1972, Ione began working at Salem Private School as a part-time custodian, and quickly became full-time due to her excellent work and attitude. She loved children and never tired from the hard work of keeping the school neat and clean (including painting and fixing). Ione was known for asking a lot of questions. Robirda’s friends loved her because she cared about them and showed a genuine interest in their lives. She was always running errands for neighbors and helping others. She really had a servant’s heart. One of her favorite hobbies was to keep her 1967 Dodge Dart running. She was a regular at the local repair shop and became great friends with the mechanics. When she had to give up driving, she gave the Dart to her favorite mechanic. She was too busy for many idle hobbies but she did find some time for watching - Portland Trail Blazers, Oregon State Basketball, The Price is Right, Truth or Consequences, Ed Sullivan Show, and her music – Elvis Presley, Eddie Fisher, Lawrence Welk, even Tom Jones! Ione is preceded in death by her parents John and Hildred Stinton Dunlevy; her husband George James and his children – Dewey James and Syldiah James Little (Deward); her siblings Clair Dunlevy, Alice Cote, John Dunlevy, and Florence Hall. Ione is survived by her daughter Robirda James Lee (Rich); Granddaughters Corrie Phillips, Kelsey Lee Jahne (Don), and Brooke Lee; Sisters - Della Copple and Betty Brown; Daughter-in-law Shirley James-Garcia; her special care giving friends (family) Veronica Garcia and Iris Ayala; and many nieces and nephews. Viewing begins at 1:30 – 2:30 pm and a Memorial Service from 2:30 - 3:30 pm on Saturday September 18, 2021 at Keizer Funeral Chapel, 4365 River Road North, Keizer Oregon 97303. (Light refreshments will be served at 1:30 pm). Burial will follow after the Memorial Service at City View Cemetery, 390 Hoyt Street South, Salem Oregon 97302. Memorials can be directed to CASA Marion County (Court Appointed Special Advocate - assisting Foster Children) Keizer Funeral Chapel is in charge of arrangements.

Ione Hazel Dunlevy James Ione James passed away peacefully on Saturday, September 11, 2021 at her residence in Salem, Oregon. She is now with The Lord Jesus in Heaven and in perfect health. She was such a character and so much fun &#8211;... View Obituary & Service Information

The family of Ione Hazel James created this Life Tributes page to make it easy to share your memories.

Ione James passed away peacefully on...

Send flowers to the James family.