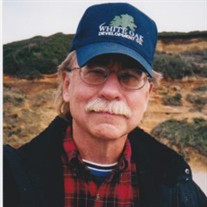 December 30, 2021 was Gerald Walter Dreher’s last day on earth. Jesus took him to heaven. Jerry was 74 years old. He was released from these earthly trials, pains, anxieties and troubles into the freedom that he so longed for. Born to Walter and Virginia Dreher on August 17, 1947 in Woodburn, Oregon. His sister Nancy was born just 13 months later. Their parents owned a dairy farm at St. Paul, Oregon. Jerry attended elementary schools in Newberg and St. Paul. In1959 the family moved to a rural, lakeside home in Mason County, Washington. The nearest town was Belfair. Jerry graduated from North Mason High School in 1965. He enrolled at Olympic College in Bremerton but interrupted his studies to go to Europe with a friend. They toured several countries by motorcycle. He was drafted into the Army in 1968, served in Vietnam and was honorably discharged in 1970. Being a Vietnam vet he was troubled with lifelong disturbing memories of the war. In 1971 Jerry finished his studies at Olympic College and received his Associate in Arts. Jerry moved to Oregon and met Karen later in 1971. They married on November 21, 1973. Bought a home in Portland in 1974. While they lived in Portland Jerry worked in the construction industry and began Carpenter’s Apprenticeship training, achieving his Journeyman’s rating in 1975. Jerry and Karen had two children, Jesse and Adam, while they lived in Portland. We moved to our property in Woodburn in 1984, living in the shop building that Jerry built, until the actual house was completed. Jerry was master of every project he endeavored to accomplish, not willing to skimp on any detail. Gerald Dreher was devoted to his family, church family, friends and neighbors. Loyal, faithful, protective, kind, generous, caring and helpful. He leaves behind his wife, Karen, sons, Jesse (Jvon), Adam (Lisa) and one precious grandson, Danny. Thank you to all who knew him as a friend. We will treasure our memories of Jerry forever. And we will see him again in heaven. Soon. Celebration of Jerry’s life will be held at New Harvest Church in Salem on February 26 at 11:00 am with luncheon to follow. Jerry’s favorite charities were: Wounded Warrior Project, USO, Samaritan’s Purse and Union Gospel Mission Salem.

December 30, 2021 was Gerald Walter Dreher&#8217;s last day on earth. Jesus took him to heaven. Jerry was 74 years old. He was released from these earthly trials, pains, anxieties and troubles into the freedom that he so longed for. Born... View Obituary & Service Information

The family of Gerald "Jerry" Walter Dreher created this Life Tributes page to make it easy to share your memories.

Send flowers to the Dreher family.