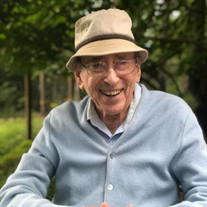 Floyd Gilbert Osban went home to be with Jesus on August 28, 2021 at age 92. Floyd was born to Floyd & Iva Osban on February 2, 1929 in Lamar, Colorado. Floyd was an army veteran who served 1950-1952 and was stationed in West Germany. Floyd met his wife, Joann Cnossen, in 1954 in Long Beach, California. They married June 29, 1955 and went on to have 5 children: Jeanine, Judy, Floyd Jr, Darlene, and Darrell. Floyd was called to be a pastor. He began his ministry in southern California and was licensed in 1962 with the Southern California District. He & Joann pioneered a church in Sunnymead, California which is still going strong today. He was ordained in 1967 at the Northern California/Nevada District Council. In 1972, the Osban family moved to Oregon where Floyd pastored several churches. He resigned his last church on his 80th birthday; he then continued in ministry as an associate pastor leading the seniors, and then held services at their assisted living facility for 3 years. Floyd was a dedicated and loving father. His knowledge and guidance was the foundation of his family. Anyone who knew Floyd knew that he was a most loving husband, father, and grandfather. Floyd joins his father, Floyd Albert; mother, Iva; baby sisters, Alice May and Barbara Jean; and son, Floyd Jr in Heaven. He is survived by his sister, Fern; his brother, Charles; his wife, Joann; his daughters, Jeanine, Judy, and Darlene; his son, Darrell; 14 grandchildren, and 11 great grandchildren. Throughout his entire life, he held an unwavering faith in God, which he shared with those who surrounded him. His passion was serving Jesus first and then his family. His desire for his family and friends are found in his parting words, “If I don’t see you again down here, I’ll meet you up there.” Services will be held at Life Spring Church in Brooks, Oregon on Saturday, September 4 at 11:00 a.m.

Floyd Gilbert Osban went home to be with Jesus on August 28, 2021 at age 92. Floyd was born to Floyd & Iva Osban on February 2, 1929 in Lamar, Colorado. Floyd was an army veteran who served 1950-1952 and was stationed in West Germany. Floyd... View Obituary & Service Information

The family of Floyd Gilbert Osban created this Life Tributes page to make it easy to share your memories.

Floyd Gilbert Osban went home to be with Jesus on August 28,...

Send flowers to the Osban family.