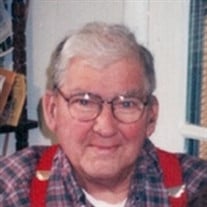 Everett Harold Walls July 22, 1923 - May 3, 2010 In loving memory of our father, grandfather and great-Papa , Everett Harold Walls, age 86, who went to be with his precious angel eyes, Bernice on May 3, 2010. Everett was born to William and May Walls in Yale, Oklahoma. They later moved to Salina, Oklahoma where he attended Salina High School. The family moved to Oregon in 1945 while he was serving our Country. He enlisted in the United States Navy to fight for our Country's freedom during World War II (1943-1946) where he proudly served on the U.S.S. Dunlap. Everett married the light of his life, Bernice, in February 1948 in Salem, Oregon. They started their life in Toledo, Oregon for the first 13 years with their 6 children before moving to the Willamette Valley in 1961. In 1978 they moved to Keizer where he lived until his death. Everett retired from CG Long Building Supply after 26 years of service. He spent many years hunting, fishing and exploring the mountains of Oregon with his sons and grandsons, teaching them the fine art of the wilderness. He was an avid bowler, bowling weekly in League Bowling in Toledo from 1952-1961 and then at Town and Country Lanes from 1961-2009. He was also a member of the Toledo and Keizer Grange hall from 1952 until his death. Everett is survived by five of his children, Ronald (Sharon) Walls, Keizer, OR, Tony (Bev) Walls, Dallas, OR, Darrell (Jeni) Walls, Anchorage, AK, Eloise (Joe) Geer, Gresham, OR and Denice (Kevin Pace) Walls, Woodburn, OR; 29 Grandchildren; 32 Great-Grandchildren; sisters, Lucy Marich,, Oakhurst, CA, Juanita Long, Salem, OR, Rosebud Melder, Cypress, TX and brother, Franklin Walls, Oak Harbor, WA. He is preceded in death by his son, Lonnie H. Walls (1954), his loving wife, Bernice L. Walls (1997), great-granddaughter, Savannah Nahme (2001) and brothers, Vern Walls (1986), Harley "Carl" Walls (1990), Alfred Carver (2000) and Albert Walls (2007), sisters Lola Kelly (1991) and Stella Roberts (2003). Services will be held at St. Edwards Catholic Church in Keizer, Oregon on Friday, May 7th at 1:00PM with a grave side Military internment to follow at Belcrest Memorial Park Cemetery. A viewing will be held on Thursday, May 6th from 1-5 PM at Keizer Funeral Chapel. Arrangements by Keizer Funeral Chapel.

The family of Everette Harold Wells created this Life Tributes page to make it easy to share your memories.

Send flowers to the Wells family.