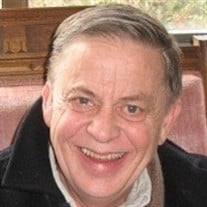 Eugene "Gene" Herigstad November 30, 1948 -October 20, 2013 Eugene "Gene" Herigstad, 64, of Salem passed away after a courageous battle with cancer. Gene was born in Salem, Oregon to Lester and Wanda Herigstad (Simpson), the eldest of four children. He attended Highland grade school, Parrish middle school and graduated from North Salem High School as an exemplary student, state wrestler, first chair trumpet player and a respected member of the student body. He went on to earn his bachelor's degree in education at Willamette University after earning a full music scholarship based on his high grade point average and his unparalleled trumpet virtuosity. Gene married Chris Mulligan in 1970 and had two sons, Tyler and Zachary. His marriage ended in 1984 but he enjoyed many shared interests with his sons, such as, fishing, camping, wood crafting, wrestling, music, motorcycling and witty sense of humor. Gene served the community as a teacher and vice principal at many school districts in and around the Salem-Keizer school district for 28 years, with much of his experience in the formative years of grades 5 and 6. Many of his students will always remember him as the whimsical, nurturing and fun-loving teacher who valued his role in helping his students realize their potential and would often bring his acoustic guitar into class and perform impromptu. He utilized his proficiency in American Sign Language so that he could better serve the needs of his hearing impaired students. Shortly after retirement, Gene lost his youngest son to an automobile accident. He vowed to honor his son by helping as many people as he could and almost immediately chose the forum of his service work to be those in alcohol and drug recovery, where he touched countless lives. He continued this service until his death, in ways including but not limited to his weekly volunteer work at the Oregon State Correctional Institution. In addition, he briefly resumed teaching a GED skills lab class at Chemeketa Community College. Gene stressed many virtues and values to his family, friends and loved ones. Be honest. Take pride in your work. Take time. Don't sweat the small stuff. Honor yourself. He was a beacon of light to many. He was also quite well known for his love of fishing, camping, skiing, artisan woodworking and master craftsmanship. He favored oak, but utilized an array of precious wood from all over the world. Those who know him well know that he was also quite proud of his Norwegian heritage. He was preceded in death by his father, Lester Herigstad and his son, Zachary Herigstad. He is survived by his mother, Wanda Reinwald, his son, Tyler Herigstad, and his siblings, Nathan Herigstad, Donna Selby, and Diane Fountain. A Celebration of Life will be held at Salem Alliance Church on November 4th at 1:00 pm, 555 Gaines Street NE, Salem, Oregon 97301. Contributions are suggested for the American Cancer Society and Willamette Valley Hospice in Salem, Oregon.

The family of Eugene Herigstad created this Life Tributes page to make it easy to share your memories.

Send flowers to the Herigstad family.