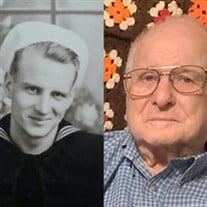 Salem- Beloved husband, father, grandfather, and great-grandfather, Edward E. Hanson passed away on October 6th, 2020 in the presence of his loving family. Edward (Ed) was born in Lynndyl, Utah to Niels Hanson and Amy Carlson on January 30, 1926. Ed grew up in Southern Utah under the care of his Uncle Jim and Aunt Carrie Ivie, after the passing of his mother when he was two years old. He later moved to Portland, Oregon with his father, where he would eventually start his family. Ed is predeceased by his son, Douglas, and survived by three sons, Ernest (Kimberly), Richard (Kandis), and Gary (Deborah), as well as 18 grandchildren, 46 great-grandchildren, and his dear wife Mary Em Hanson. Edward served during World War II in the U.S. Navy, stationed in Japan, where he survived the battle of Iwo Jima, and witnessed the famous flag raising. Shortly after his return home, Edward met who he said was a “very attractive young woman” at a wedding reception who would soon become his wife. Mary and Edward's nearly 70-year marriage began when they were married January 18, 1951 near Portland, Oregon. There, the two built a family of four sons, and Ed worked for Northwest Natural gas for 45 years as an engineer and supervisor for all industrial clients. His career brought the family to Salem in 1968. Ed was a faithful member of the Church of Jesus Christ of Latter-Day Saints, serving as a bishop of the Salem First Ward, and then serving as an ordinance worker for 28 years, and a sealer for 16 in the Portland, Oregon Temple. Through his church service, Ed brought care, concern, help, and understanding to his community. Ed was a kind, loving, and comedic man who loved dogs, Hershey’s nuggets, camping, his Sweetie and spending time with his family. He always held on to what was important, and let go of the small stuff. His funeral will be held at the Church of Jesus Christ of Latter-Day Saints at Fifth and Madison Streets in Salem on Saturday, October 10 at Four pm.

The family of Edward Hanson created this Life Tributes page to make it easy to share your memories.

Send flowers to the Hanson family.