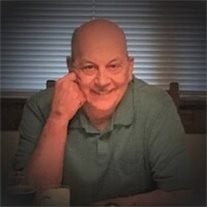 David A. Mingo Sr., age 73, went home to be with Lord and Savior, Jesus Christ on Saturday, February 13 2021 at his home in Gervais, OR of Cancer. David was born in Lebanon OR, on April 19, 1947, to Leon Russell Mingo and Isabelle Rose (Helms). He grew up in Springfield area. He joined the Navy in 1964, served in the Vietnam War on the USS Hancock and received his Honorable Discharge in 1970. On returning home he began his career in construction and carpentry building a life long reputation for his expertise craftmanship. He is survived by his loving wife of 28 years, Karen; brother Ed Mingo (Judy); His four children from a previous marriage, Angela Steffen (Todd), David Mingo Jr. (Christy), Matt Mingo, Ryen Mingo (Dianna); 3 step-children, Angela Bachman (Brad), Trent Stark (Tammy), David Stark (Jalene), 13 Grandchildren and 3 Great Grandchildren. He was preceded in death by his parents, brothers: Jack, Jerry, Steve, Dennis (Red), Mark and sisters: Jennie (Penny), Carol and Yvonne (Bonnie). Dave’s passion was fishing and hunting. He loved the outdoors and spending time camping whenever possible. Later in life after experiencing health issues he became interested in collecting and working on pocket watches. He was self-taught and was avid in repairing and restoring pocket watches, his favorite being Railroad pocket watches. Dave’s love for the Lord was central to his life and his greatest desire was to be an example of the God’s grace and mercy to those who knew him. There will be a Celebration of Life with family and friends on March 27 at 1 pm.  In lieu of flowers, please direct gifts to your favorite charity or to Bristol Hospice. We thank Bristol Hospice for their support and kindness as they cared for Dave and his family. To send a flower arrangement or to plant trees in memory of David Anthony Mingo Sr., please click here to visit our Sympathy Store.

David A. Mingo Sr., age 73, went home to be with Lord and Savior, Jesus Christ on Saturday, February 13 2021 at his home in Gervais, OR of Cancer. David was born in Lebanon OR, on April 19, 1947, to Leon Russell Mingo and Isabelle Rose (Helms).... View Obituary & Service Information

The family of David Anthony Mingo Sr. created this Life Tributes page to make it easy to share your memories.

Send flowers to the Mingo family.