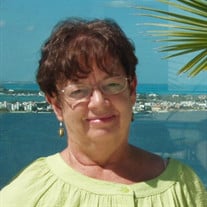 Following a courageous 20+ year battle with cancer and surrounded by her family, Barbara Ann Rice, 75, joined her Lord and Savior on April 20, 2021. Barbara was born in Tulsa, Oklahoma to Bert and Aline Pichette. At an early age she moved across country with her family to Oakland, Oregon. She relished growing up near extended family and met many dear friends who she remained close with her entire life. Barbara graduated in 1963 from Oakland High School, where she was an active participant in several school activities. Barbara enjoyed her time on the school pep squad and was honored to be crowned Prom Queen. In 1964 she married Dennis Lee Rice and moved to Eugene, Oregon. Son Daniel was born in 1968 and son Michael in 1971. Barbara cherished her boys and was active in their various pursuits as they grew up. In 1974 the young family moved to Keizer, Oregon and Barbara quickly became a mainstay in the community and its organizations. Never one to shy away from meeting people and lending a helping hand, Barbara was an integral part of Dan & Mike’s school activities and sports teams. No task was too small or too big for her to take on and contribute an abundance of energy and hours to ensure the outcome was a success. In addition, Barbara was employed at Albertsons in the Salem/Keizer area, working in the butcher block and the front customer service desk for nearly 20 years. She embraced her role as the de facto face of the store and “chief greeter”. Deeply religious, Barbara was a member of New Harvest Church, a non-denominational church in Salem, Oregon. Barbara regularly attended bible study and prayer groups. She lived her life according to Ephesians 2:10, “We are God’s masterpiece. He has created us anew in Christ Jesus, so that we can do the good things he planned for us to do long ago.” Many dear friendships came from those who shared her deep faith. With her lively personality and community involvement, Barbara knew “everybody”. No matter where she turned, she would run into someone she knew and in the rare cases she didn’t know someone she would strike up a conversation with a stranger leading to a new found friend. Family and friendships were Barbara’s fuel. She beamed when she was able to enjoy other’s company. Barbara enjoyed traveling around the U.S. and taking international cruises with Dennis and friends. She was especially fond of the Oregon Coast and loved a day trip to see the ocean. Barbara adored her three grandchildren and was a wonderful grandmother. She always made time to be with them and create special memories at Grandma Rice’s house. Barbara enthusiastically supported their activities, particularly baseball games and dance recitals. She never missed celebrating the big and little accomplishments the grandchildren achieved. Barbara is survived by her husband of 57 years, Dennis, sons Dan (Kristi) of Lake Oswego, Oregon and Mike of Tigard, Oregon, three grandchildren, Cameron, Katie & Kellen and two half-sisters. Additionally, she had many cousins, nieces, nephews and extended family. We would like to extend enormous gratitude to all our family and friends for their gift of love, support and prayers for Barbara. A special thank you to Dr. William “Bud” Pierce and his team at Oregon Oncology Specialists for their dedication during Barbara’s extended fight with cancer. Also, a thank you to Willamette Valley Hospice and staff for helping take care of Barbara the past two months. Everyone who knew her understood that Barbara lived to do for others and struggled to accept gifts for herself. In lieu of flowers, the family suggests that Barbara be honored with donations to the American Cancer Society. With current Covid-19 restrictions a sizeable Celebration of Life is not feasible. The family may plan an event at a later date. However, the family would love to hear from anyone who chooses to share a story, anecdote, laugh or note about Barbara. Please email: [email protected] with those wonderful memories the family will cherish always.

Following a courageous 20+ year battle with cancer and surrounded by her family, Barbara Ann Rice, 75, joined her Lord and Savior on April 20, 2021. Barbara was born in Tulsa, Oklahoma to Bert and Aline Pichette. At an early age she moved... View Obituary & Service Information

The family of Barbara Ann Rice created this Life Tributes page to make it easy to share your memories.

Following a courageous 20+ year battle with cancer and surrounded...

Send flowers to the Rice family.