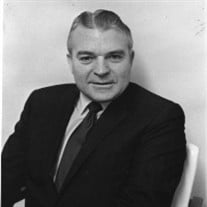 Dr. Ambrose "Bucky" Shields died at home in Portland on November 2, 2013, surrounded by his family. He was 99 years old and succumbed to heart disease. Born in 1914 on the family homestead in Wellsville, Kansas, he was the seventh of the nine children of Byron Shields and Maude Dixon Shields. He attended a one room grammar school and after graduation from Wellsville High School, he earned a Bachelor of Science degree (1938) and a Doctor of Medicine degree (1940) at the University of Kansas. He worked his way through KU in a variety of jobs, including threshing wheat, picking peonies and washing dishes. He was so hard-pressed for money that if a dean had not given him one dollar to complete payment of his fees in 1934, "Bucky" would have had to drop out of college. After his 1940 marriage to Alice Louise Crane, of Olathe, Kansas, he moved with his new bride to Portland where he completed an internship and then started a residency in surgery at St. Vincent Hospital. He volunteered for the Army Medical Corps in 1942 and served for the duration of World War II in North Africa and Europe. Upon his return from war, Dr. Shields embarked on a distinguished career as a surgeon, which spanned 46 years and was acknowledged with many professional accolades. Family, patients, colleagues, and friends will remember "Bucky" for his loving and giving nature, his zest for life, his humor and wise counsel, and his passion for medicine. He was a gifted storyteller with a prodigious memory of people and events. An avid outdoorsman and accomplished golfer, he hunted, fished, and played an amazing eighteen holes well into his nineties. "Bucky" was preceded in death by Alice, his wife of 68 years. He is survived by two sons, Dr. Paul Shields (Aletha) and Alan Shields (Teri Jo), and his daughter Mary Antiochos (Spiro); his six grandchildren, who lovingly referred to him as "Pa" , are Brent and Ryan Shields, Anne Marie Charnholm, Katie Lynne Ifrah, Brendan and Brian Antiochos. "Bucky" also leaves behind six great-grandchildren: Coralie and Keelan Shields, Amy and Megan Charnholm, Nathan Ifrah and Clay Antiochos. A Memorial Service for Ambrose "Bucky" Shields will be held at a later date to be announced. Donations in his memory may be made to the Dr. A. B. Shields Nursing Scholarship Fund, Providence St. Vincent Medical Foundation, 9205 SW Barnes Rd, Suite 211, Portland, OR 97221. "Bucky" expressed the wish to live to 100, but he will live much longer than that because love lasts forever in the hearts of family and friends.

Dr. Ambrose "Bucky" Shields died at home in Portland on November 2, 2013, surrounded by his family. He was 99 years old and succumbed to heart disease. Born in 1914 on the family homestead in Wellsville, Kansas, he was the seventh of the nine... View Obituary & Service Information

The family of Ambrose Byron Shields created this Life Tributes page to make it easy to share your memories.

Send flowers to the Shields family.